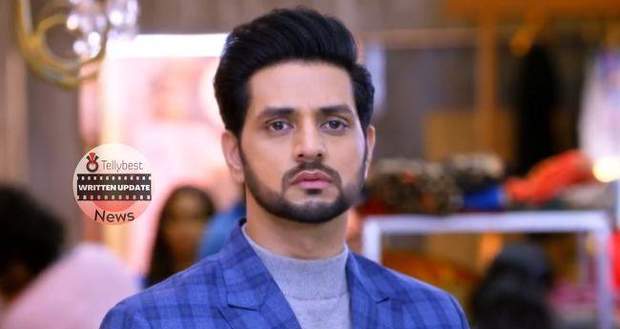 Maasa welcomes them warmly & Preeta addresses her as Rani Ji.

Shekhar who is Maasa's son welcomes Preeta & Rishabh while Preeta is mesmerized by all the ladies enjoying dancing the Rajasthani way.

She joins them & laughs when Arjun enters the palace as well and gets welcomed traditionally.

Rishabh goes to an unbothered Arjun and asks what he is doing here while Shekhar announces that Arjun is here for the same deal as Rishabh.

Shekhar notices the tension between Arjun & Rishabh while Preeta tries to look away from Arjun.

In a corner, Rishabh tells Shekhar he won the bidding to convert this palace into a hotel so why has he called Arjun here for the deal?

Shekhar informs Rishabh he will move on with the better fit as he liked Arjun's proposal sent to him yesterday.

However, Arjun doesn't listen to Preeta's nonsense, and she leaves angrily.

Arjun then joins Rishabh and Shekhar's conversation & taunts Rishabh for seeming so angry about this deal.

Rishabh warns Arjun to not think that he has seized the deal from his hands.

Arjun stays calm & tells Rishabh once upon a time ago, a group of people wanted to erase his existence forever and he is here for this deal to make a firm impression that doesn't get erased.

Shekhar tries to calm them down, reminding them that it is just business.

Afterward, Arjun promises Rishabh that the deal will be his.

On the other hand, Prithvi's words ring in Preeta's mind when he told her that Arjun was behind Rishabh's accident.

Maasa notices Preeta's sad expression & advises her not to overthink.

After Maasa goes, Radhika, Maasa's daughter-in-law asks a tired Preeta if Arjun is her old flame or not.

Preeta shakes her head negatively & says he is no one to her except Rishabh's business rival.

Later, Maasa asks Shekhar to take care of the meeting since it is Karva Chauth day and urges Preeta to get ready for the Karva Katha around 4 PM.

Meanwhile, at Luthra Mansion, all the ladies complete their Karva Chauth ritual of the afternoon including Srishti who cannot wait to break her fast.

At the palace, Rishabh & Preeta settle in their room and a confused Preeta asks him if the deal was sealed for the Mumbai Palace, so why is Arjun here to interfere in Rishabh's business?

Rishabh states Shekhar did not tell him the exact reason while Arjun wants to snatch this deal like an eagle.

© Copyright tellybest.com, 2022, 2023. All Rights Reserved. Unauthorized use and/or duplication of any material from tellybest.com without written permission is strictly prohibited.
Cached Saved on: Monday 21st of November 2022 06:12:59 AMCached Disp on: Saturday 10th of December 2022 02:42:33 PM