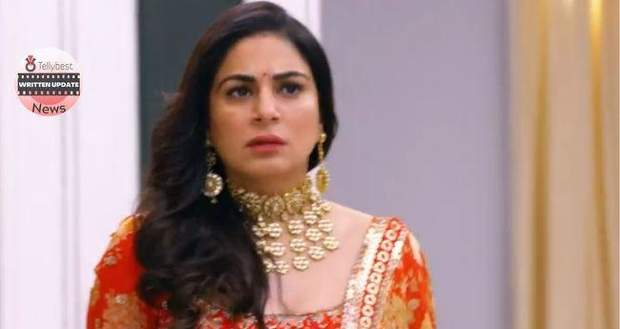 Today's Kundali Bhagya 14th September 2022 episode starts with Shrishti telling Arjun that he often reminds her of Karan and asks Arjun to not hate Preeta as she is good at heart but she might see Karan in him and that's why she gets defensive with him.

After Arjun leaves, Shrishti tells Anjali to not get involved with Arjun as she is no match for Arjun.

Anjali bristles at Shrishti’s comments and asks who is his right match while Shrishti tells her that Preeta and Arjun are the best matches.

Anjali scolds her for thinking this as Preeta is married to Rishabh.

Shrishti gets scared and tells her to not say anything to anyone and berates herself for thinking like this.

Meanwhile, Rishabh is looking for the keys and could not find them and is bungling the whole room in search of it.

Arjun who is passing by senses that something is wrong while Rishabh tells him that he can't find locker keys.

Arjun hands over the keys to him saying he must not have seen them in a hurry.

Seeing Rishabh run out, Arjun also goes after him and tells Anjali to go home.

Meanwhile, Prithvi comes to the conclusion that Arjun has a different side that he keeps hidden. He believes that Arjun is in love with Preeta but he will not let him get near her.

Just then Anjali comes to Arjun and tells him that she will not let him come to Luthra house.

On being told to keep out of his matters, Anjali tells him that it is impossible as she is too close to his everything.

Prithvi realises that Anjali is in love with Arjun but Arjun loves Preeta.

Meanwhile, Rishabh breaks the key while trying to open it.

Preeta gets angry for breaking the key as now there is no way to get Kavya out as only Karan knows the password.

Mahesh tells him to call the key dealer so he might have a solution.

Rishabh calls him and goes to get him while Preeta once again tries to assure Kavya.

Elsewhere, Sherlyn is looking for Prithvi and comes across Arjun.

Anjali reminds Arjun of his purpose for coming to Luthra's house.

However, Arjun tells her that now Sherlyn and Prithvi both are in the house and that means trouble.

Later, seeing Rishabh worried, Arjun and Shrishti accompany him to get the key dealer.

On the way, Arjun asks Rishabh what is the matter and why is he looking so crazy.

Rishabh in his agitation tells him that Kavya is locked in the locker and no one knows its password.