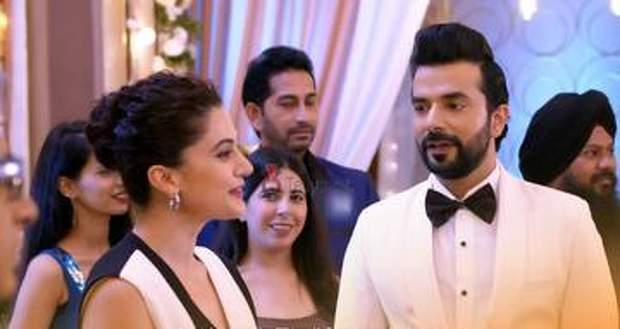 Today's Kundali Bhagya 15th August 2022 episode starts with the family getting surprised as Punjabi dhol and Bhangra dancers arrive to lighten the atmosphere of the party.

Arjun gets angry seeing Preeta dance with Rishabh and goes dancing with her.

However, Preeta gets flashbacks of her time with Karan and follows him into the garden.

Meanwhile, Prithvi tells the servants to close the main door and changes the scene by showing his gun and telling all of them to stand back as they are there to rob them.

Preeta sees Arkun roaming around the kitchen as if he's familiar with it and questions him about it while Aryan recalls seeing Preeta with Rishabh in the past and tells her that he thought she was smart, but she is not.

Back in the hall, Prithvi mocks the Luthra family while Rana sees that Preeta is not there and points it out to Prithvi.

At the same time, Arjun tells Preeta that he has been in the kitchen many times during the party and that he has a sharp memory.

Preeta annoyedly leaves while Arjun follows her as they both bump into Kavya.

Kavya informs them that they saw the servant Mohan unconscious in a room with his face stuffed with a cloth.

Preeta tells Kavya to hide in her room as they are playing hide and seek after which Preeta and Arjun both go to see what the situation is.

Rishabh notices Preeta and is trying to indicate to her to not shout while Arjun notices it and hides Preeta.

At the same time, Prithvi notices Rishabh looking upwards and sends some goons there as he suspects someone is there.

Suddenly, Rishabh gets a chance and starts attacking the goons while other family members join in beating up the goons and overpowering them.

Meanwhile, Arjun scolds Preeta and drags her to a room while she tells him that she wants to go downstairs.

However, he explains to her that they need to think this through clearly and make a plan to save their families.

Preeta argues that her name is Preeta Luthra and Arjun tells her that he knows she is Preeta Karan Luthra.

The atmosphere becomes awkward when Dida and a guess lady come there.

The lady mistakes them as a couple and blesses them while they both see Prithvi and a goon going the other way with a bag in their hands.