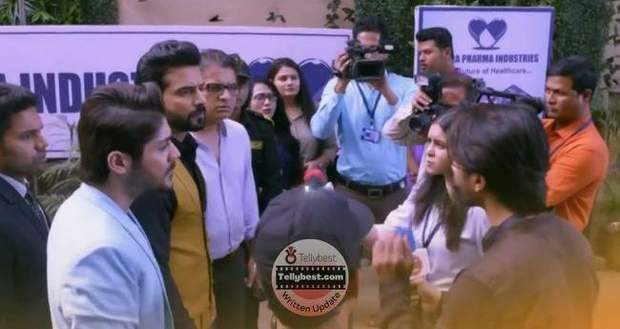 Today's Kundali Bhagya 15th December 2022 episode starts with Sandeep telling on the camera that Luthras are the goons who not only manufacture duplicate drugs but also behave like hooligans.

Meanwhile, Rishabh and Mahesh tell Sandeep that he is not here to report but is sent by someone to ruin their reputation in the media.

Sandeep begins to misbehave with Mahesh which Arjun does not like and he tells Sandeep to apologise to Rishabh and back off.

Just then Rakhi, Preeta and Shrishti also arrive there which the media tries to sensationalise.

However, Preeta and Rishabh both tell them to only report and not sensationalise the news by giving verdicts like the judge.

Later the police arrive at the pharma go-down and tell Rishabh that he is being arrested for making duplicate drugs and putting lives at risk.

Rishabh tells them that there is some mistake and he has not done any such thing.

Rakhi tells the police that he is mistaken because their companies do not make duplicate drugs and have a reputation in the market.

Preeta also tells the police that they cannot arrest Rishabh without evidence.

Just then Arjun comes there and gets surrounded by media who want to know if he is behind leaking this news.

Just then Malkani arrives there with Anticipatory bail and saves Rishabh from arrest.

After a while, Arjun tells Preeta that he has done all this to get his attention and will continue to do it until she understands.

Meanwhile, Preeta tells Rishabh that Arjun is planning something very big and they will have to be very careful.

In the meantime, Rishabh tells Mahesh to go along as he has some work but Mahesh tells him to come with them and the manager will take care of the work.

Meanwhile, Arjun and Anjali are waiting for the news to break so that the Luthra pharma shares go down and they buy it from them.

Anjali shows Arjun the company names that are buying shares on their behalf which makes Arjun leave thinking of something.

Meanwhile, Anjali tells Snigdha’s Dadi that Arjun is now equipped with a proper understanding of the war.

However, Snigdha’s Dadi tells Anjali that she feels that something is not right here.

Elsewhere, Mahesh is talking about the losses while Rishabh tells them to have hope as they are working to get back.

Meanwhile, Arjun arrives at the Luthra house and meets an assistant there who asks him to give him two minutes.

In the meantime, Anjali calls Arjun and tells him that all Luthra companies share are being bought by their shell companies and now they own up to 51 per cent shares of the company.

Arjun also tells her to buy all the shares from other companies.

In the meantime, Rishabh tells Mahesh and others that Arjun only owns 17 per cent of the shares and that they still own the company.

However, Arjun comes there and tells him that Rishabh is wrong because he owns 51 per cent of the shares and now owns the company.

Rishabh tells him to show the papers and not to get too excited as they are bigger than one company and will not be affected by it.

Arjun smiles at Rishabh and tells her assistant to take pictures of the house because he wants to change some interior here.

Later, Arjun tells Rishabh that he has come here to see the frustration in his eyes and to tell him that day one of his challenges is over and in a few days he will get what he wants.

© Copyright tellybest.com, 2022, 2023. All Rights Reserved. Unauthorized use and/or duplication of any material from tellybest.com without written permission is strictly prohibited.
Cached Saved on: Wednesday 25th of January 2023 12:41:03 PMCached Disp on: Monday 6th of February 2023 04:51:40 AM