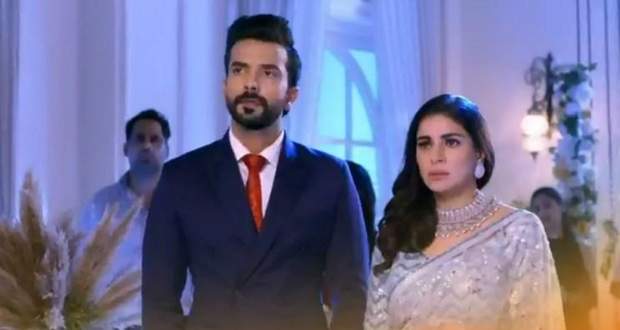 Today's Kundali Bhagya 15th July 2022 episode starts with Rakhi telling Arjun/Karan that because he is like Karan. He shares attributes like Karan but his intentions are pure.

Preeta tells Rakhi that she should not talk with people who do not know when to talk and what to talk about as they are very dangerous and unpredictable.

Dadi also tells him that she was expecting something very nice regarding Karan, not something painful.

Karan asks the rest of the guests to tell whether what he has shown was right or not.

Karan explains to the Luthras that good and bad both are part of Karan’s life and he has selected them to make it look real.

Later, Karan’s fan insists on Rishabh and others to stay at the party as what the skit revealed was exactly what they want to see.

Rakhi comes to Arjun/Karan and tells him that no one is leaving as the misunderstanding has been cleared now.

Anjali comes to tell Arjun that Luthras are staying.

Karan tells Anjali that his mother has touched his cheeks and accidentally he hugged Mahesh.

Afterwards, Arjun/Karan goes to ask Preeta for a dance for Karan’s fans.

Amidst dancing, Arjun asks Preeta how Karan died while Preeta asks him if he is mad to ask these questions to her.

He asks her if Karan has ever danced with him with a bat in hand.

Preeta remembers moments with Karan and slaps him tightly.

On being asked, Preeta tells Rishabh that Karan is dancing weirdly with her and is asking very personal questions from her.

Rishabh loses his temper and questions him for daring to ask Preeta such questions and warns him to stay within his limit.

Rishabh tells him that he has kept this party to insult Karan and his family.

Rishabh tells him that he does not deserve all of Karan’s things and if it's up to him he would take it all back.

Rakhi tells Karan that if Preeta has slapped him then he must have done something very wrong else she wouldn’t have slapped him.

Rakhi also tells him that she was wrong to compare him with Karan as he is very bad.

Press questions Karan to comment on Rishabh’s allegations while Karan comes to his room and throws things.

Karan tells Anjali that Preeta was irritated so much that she slaps him to quieten him.

Karan says that Preeta has broken him into pieces and taken his identity from him and he will not rest until he avenges his pain.