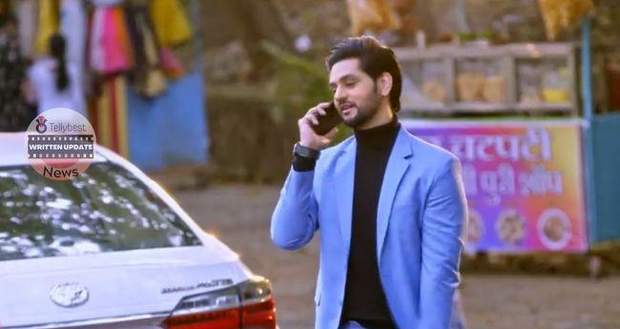 Today's Kundali Bhagya 15th November 2022 episode starts with Kareena telling the police that Anjali has caused the accident with her son and asking her to arrest her.

However, Arjun defends her and tells Kareena that Anjali is innocent but Kareena tells the police that they have evidence against Anjali and that is why they will arrest her.

Anjali tells Arjun to not overreact as she has done nothing wrong and it will be proven too.

Arjun agrees with Anjali and tells her that he will follow her with a lawyer and get her out.

Later, Arjun asks Kareena about Rishabh but she tells him to keep his concern to himself and stay away from his family from now on.

Meanwhile, the doctor asks Preeta to bring the medicines while telling everyone that Rishabh is out of danger and will wake up at any moment.

Later, Arjun calls the lawyer and tells him to meet him at the police station with Anjali’s bail papers.

On his way, Arjun is recalling Kareena’s warning and bitterly thinks that Rishabh has wronged him so much that he does not want to meet Rishabh and nor does he care about his well-being.

After a while, he decides to go to the hospital to find out about Rishabh and what lies they are construing against Anjali.

Meanwhile, Rishabh wakes up and everyone is pleased to see him and advises him to never take risks while driving.

Kareena comes back and tells Rishabh that she has gotten Anjali arrested for his accident.

However, Rishabh tells her that she should have checked the facts first as it might have been just an accident.

Nevertheless, Kareena is furious and tells Rishabh that she did what she thinks Anjali deserves.

Afterwards, she asks everyone to not mention this to Preeta.

Just then Preeta comes inside and is happy to see Rishabh awake.

Later, the doctor discharges Rishabh with instructions to do complete bed rest for two days.

After a while, Shrishti tells Preeta about Anjali’s arrest at Kareena’s behest.

Preeta approves of Kareena’s decision and calls Anjali a wicked person with an innocent face.

However, Rishabh is not convinced and sides with Anjali giving her the benefit of the doubt.

Meanwhile, Arjun arrives at the police station with CCTV footage and tells the lawyer he leaves no stone unturned when it comes to people he loves and that includes Anjali.

Just then Preeta arrives at the police station and accuses Arjun of getting false evidence to save Anjali.

Elsewhere, Rishabh comes home with the Luthras and asks Girish to call Kavya.

Kavya asks Rishabh about his accident and later tells him about talking to Arjun on a video call on Anjali’s mobile.

Hearing this, Shrishti and Kareena become convinced that Arjun has made Anjali do the accident.

On the other hand, Preeta tells the inspector to not release Anjali who has purposely caused the accident.

However, the inspector informs Preeta that Anjali has gotten the bail.

On hearing about the bail, Preeta tells Arjun that she will challenge him in court and will get Anjali her due punishment.

Before leaving, Arjun accuses Preeta of loving Rishabh while being married to Karan.

Preeta fumes with anger upon hearing such a personal comment and tells him that she had and will always support Rishabh.

At home, Preeta tells Rishabh that Anjali has gotten bail due to Arjun.

© Copyright tellybest.com, 2022, 2023. All Rights Reserved. Unauthorized use and/or duplication of any material from tellybest.com without written permission is strictly prohibited.
Cached Saved on: Monday 21st of November 2022 03:57:34 AMCached Disp on: Thursday 1st of December 2022 01:28:15 PM