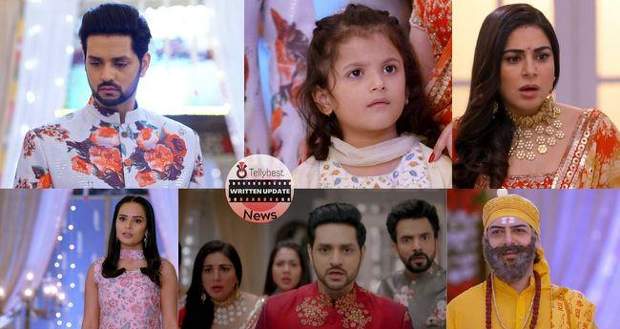 Today's Kundali Bhagya 15th September 2022 episode starts with Rishabh telling Arjun that Kavya is locked in a locker and his only key is broken and that's why he has come to get the key dealer so he might unlock it.

Arjun stops the car telling Rishabh to get down and that he will drive because he knows how to drive fast.

Meanwhile, Sherlyn brings Prithvi to a room and scolds him for wasting his time loitering the house and focusing on getting money from Arjun else they will continue to toil in poverty.

However, Prithvi tells her that tomorrow he will extract money from Arjun when he will show him proof of Arjun's meeting with Raja and Vishnu where he admits to sending Raja and Vishnu to kill Rishabh.

Kritika who is locked inside the cupboard is coming back to consciousness.

Sherlyn asks Prithvi to come back to the house when he is planning to do everything tomorrow.

In Karan’s room, Preeta and the rest of the family is trying to assure Kavya.

After a while, Kavya lies down and becomes unconscious.

Just then, Arjun comes running to the house followed by Rishabh and Shrishti.

Seeing Arjun, Preeta questions him about the key dealer while Shrishti tells him that Arjun has brought them back.

Preeta scolds Arjun for not bringing back the key dealer with him while Karan goes to input the password.

Opening the locker, Karan takes out Kavya from the locker and brings her down.

Just then, Kritika also comes out of the cupboard.

In the hall, Rakhi tells everyone that on the auspicious occasion of Ganesh Chaturthi, God has returned Karan to them.

Everyone looks at them shocked while Rakhi goes to hug Arjun.

Elsewhere, Sherlyn and Prithvi come back to the house and asks begin to argue about not having any money to order food.

Just then Prithvi’s friend also comes to them and asks them to give him his share once he gets money from Arjun. He also offers his help for the right price in future escapades.

In the meantime, Shambhu also comes to Prithvi’s house telling him that he is giving them six more days to arrange money for him.

On the other hand, Anjali tells them that he is not Karan but Arjun Suryavanshi.

However, Mahesh and Rakhi tell him that he is their Karan else he would not have asked him for a golden pen or bring tea for Rakhi when she has a headache.

Shrishti also asks Preeta if she remembers any moment when Arjun reminds her of Karan.