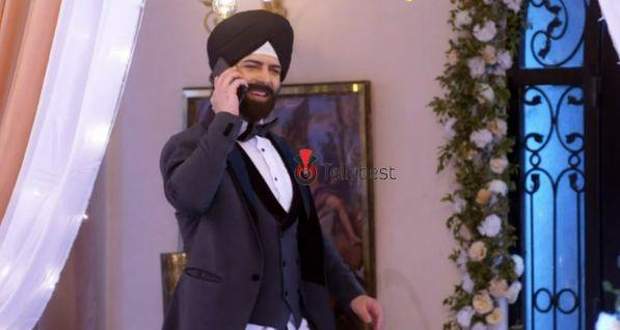 Just then, Sherlyn points the gun at everyone and asks them to hand over the jewellery to her.

Rakhi protests but Rishabh tells them to take the jewellery and leave everyone alone.

Meanwhile, Kavya comes running into the hall and Sherlyn grabs her.

Rishabh tells them to leave Kavya alone and take everyone else’s jewellery.

However, Sherlyn tells him that she wants Kavya’s necklace and that she will take it.

In the meantime, Kavya bits Sherlyn’s hand and runs away but Prithvi catches her and holds her in his arms.

Just then Preeta sees Kavya in Prithvi’s custody and runs to rescue her.

She begs Prithvi to give her Kavya back and Prithvi who has a crush on Preeta gives him easily.

Later, Prithvi realises Sherlyn watching her closely and captures Kavya again and puts a knife on her while Sherlyn captures Preeta.

Arjun who was trying to think of a way to save everyone sees Kavya under the knife and rushes to free them without any thought.

Once again a fight breaks between everyone and the goons begin to get beaten.

Prithvi who finds the gun decides that he will not let his plan fail and fires in the air to get everyone’s attention.

Everyone takes refuge in the house and by the time hall is cleared all the Luthra are safely locked except for Sameer.

Meanwhile, Anjali drags Arjun into the room and asks him about jumping like a madman whenever Preeta is in trouble.

Arjun defends himself saying he was saving his family and not Preeta.

Afterwards, he leaves the room telling Anjali to let him save his family first and not talk about Preeta with him.

Meanwhile, Rishabh is telling Rakhi, Preeta, Kavya and Mahesh to not come out of the room at any case and he is going to face the goons.

Neither Mahesh nor Rakhi is allowing him to leave when Arjun comes in and tells them to trust Rishabh while assuring Rakhi that he will not let anything happen to Rishabh as he has promised.

On the other hand, Sherlyn finds Prithvi and tells him to leave as Police are coming and they should leave before they come.

Prithvi does not listen to her and tells her that he will only leave after bringing Luthras to the road. He also tells them that they will make Preeta their hostage as their escape route.

Downstairs, Raja is told that Luthras are nowhere to be found while Vishnu tells him to tell the guest that Rishabh’s younger brother tried to kill him.