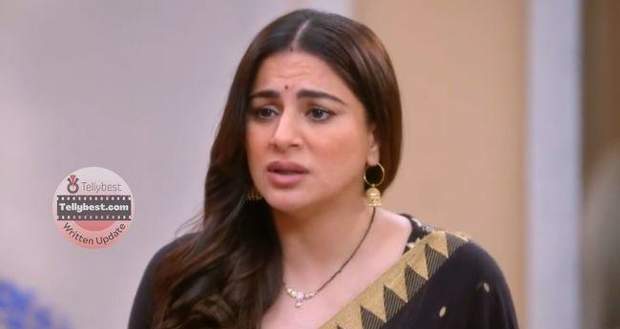 Meanwhile, Arjun rings the bell and sees impatient Anjali. Further, she starts to ask him questions but he tells her that nothing can harm him and he will talk to her in the morning.

On the other hand, Preeta is shocked when Shristi suddenly opens the door and she looks appalled.

Shrishti apologizes for her abrupt entrance and asks Preeta if everything is fine as she looks pale.

Catching her breath Preeta says that she is fine and she just got shocked.

Shrishti holds Preeta and tells Preeta that she knows her from childhood so Preeta can’t lie to her.

Preeta finally admits that she is scared of the threats Arjun just gave and she feels like whatever Arjun told her will happen.

Further, she says that she doesn’t care about the money but her family is what matters most to her.

On the other hand, Arjun recalls his encounters with Preeta and rage boils inside of him and he thinks and pledges that Preeta has to remember him until the day she dies.

He further says that their marriage will be a marriage of revenge that this whole world will remember and he says that Preeta will be separated from Rishabh no matter what.

On the other hand, Sameer asks Rishabh if he is ok and he says that he’s angry.

Coincidently both, Rishab and Arjun start punching their punching bag and remember the same conversation on the party night and a few hours ago where Arjun threatens them.

Later, Mahesh tells Rakhi that he is worried about Arjun and Rishabh.

Hearing this Rakhi asks him why and he tells her that both Arjun and Rishab have the same nature but Kareena butts in and tell him that Rishab is a very mature boy and nothing like Arjun.

Mahesh then clears that Rishab has two sides one is mature and polite other is aggressive and arrogant and this arrogant side is similar to Arjun’s behavior.

With a blindfold of love toward Rishabh Kareena denies all the stated facts and says that Arjun is nothing like Rishab.

Mahesh turns away and tells Kareena that Arjun and Rishab are the same and for Arjun, the Luthares are the villains.

At the same time, Rishab who heard everything states that he alone himself is the villain for Arjun and tells them all to keep faith in him.

Mahesh states that both are in aggressive mode and thunder is brewing.

Meanwhile, both Arjun and Rishab see the thunder and brace themselves.

On the other hand, Shrishti tells Preeta that they are together and Arjun has a different passion for Preeta then she hugs her goodnight.

Preeta gets a video call from an unknown number, she picks up the call and finds out that it was Arjun.

She calls him on his number and tells him that she isn’t afraid of him.

He smirks and says that in the 7-day challenge one day has ended and Rishab’s company lost its stock value and he tells her that Kavya belongs to him.

The next morning, outside the school, Kavya asks for a balloon and ice cream but Preeta denies her and sends her off to school.

Seeing this Arjun decides to fulfill his daughter's wishes.

© Copyright tellybest.com, 2022, 2023. All Rights Reserved. Unauthorized use and/or duplication of any material from tellybest.com without written permission is strictly prohibited.
Cached Saved on: Wednesday 25th of January 2023 05:15:32 PMCached Disp on: Wednesday 1st of February 2023 06:57:02 PM