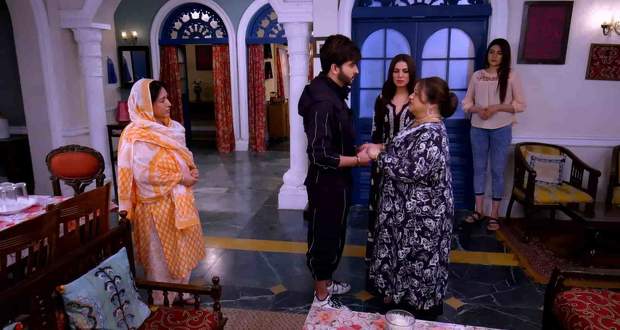 Today's Kundali Bhagya 16 February 2021 episode starts when Sherlyn keeps checking her phone and gets mad at Prithvi for not calling her on Valentine’s Day.

Mahira arrives in her room and tells her she had seen Karan going to Sarla’s house to fight with Preeta.

At the Arora house, all the neighbors are confirming that the thief is not Karan but could have been someone else.

They begin to request Karan for autographs and selfies. After this, Srishti asks all of them to leave.

Sarla asks Preeta about Karan's appearance in the house so Preeta says that Karan has come to say something and asks Karan to say it to Sarla.

Karan tries to say that he has come to confront his love for Preeta on Valentine's day but stammers seeing Sarla's angry face.

Srishti and Janki aunty is teasing Karan for being shy.

After all this session Sarla requests Karan to leave. Karan, with a hesitant tone, asks Sarla for her permission to let Preeta go with him.

He holds Sarla's hands and promises to always trust Preeta in any situation, she gets emotional and agrees to send Preeta with him the next morning. Karan hugs Sarla and wishes her a Happy Valentine’s Day.

Karan leaves and everyone goes to their rooms but Karan is back again in Preeta's room.

She then realizes about his wound and goes to get a turmeric paste to apply on his wounds, and runs into Srishti and Janki.

Somehow she manages and stops them from entering her room.

Preeta brings the paste and begins to apply it to his wounds, which brings them closer.

© Copyright tellybest.com, 2020, 2021. All Rights Reserved. Unauthorized use and/or duplication of any material from tellybest.com without written permission is strictly prohibited.
Cached Saved on: Sunday 9th of May 2021 11:03:59 PM