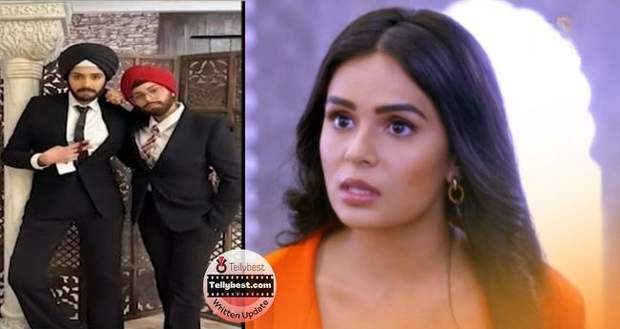 Preeta tells them to take pictures and make videos of everything they can get their hands on which they can later observe in detail.

By the time Arjun comes to their room, Vishvas finds Arjun’s chain but he cannot show it to Preeta as Arjun comes there.

Preeta and Shrishti hide seeing Arjun who asks Vishwas to show him his ID and who has sent him.

Snigdha’s Dadi tells Arjun that there were two more people with him.

Arjun asks Wishvas about his friend while Preeta and Shrishti hide behind the chair fearing being seen.

In the meantime, Kareena is calling Rishabh and asks Sameer why is Rishabh’s phone coming unreachable.

Sameer tells Kareena that Rishabh is very stressed as he has taken a big loan for the land and has asked him to not call him again and again.

Just then Mahesh comes there telling Kareena that Arjun cannot be Karan otherwise he would never allow Rishabh to invest in disputed land.

Meanwhile, Vishvas tricks Arjun and runs away from his house while dropping his chain on the floor.

Arjun is about to call security when Snigdha’s Dadi tells him that they are on a break as there was a raid.

Later, Anjali asks Arjun who could have sent those people while Arjun recalls Mahesh's questions at the Luthra house and tells Anjali that Luthras want to find out about his truth.

After they leave the room, Shrishti and Preeta come out puzzled to hear about Arjun's words but quickly finish taking the pictures and run away.

Arjun and Anjali return to their room and Arjun checks his drawer and is shocked to see it empty.

Arjun decides to tell the truth to Luthras before anyone else can.

In the meantime, Shrishti and Preeta come to the car where Vishwas tells them about finding a chain but had to drive in a hurry seeing Arjun coming after them.

Later, Anjali spots someone going inside and follows him.

In the meantime, Vishwas tells Preeta and Shrishti that he will have to leave for duty now.

Rishabh complains to Rakhi for not being happy to see him in his casual way.

Just then Rakhi sees Arjun at the door and invites him in with tear-rimmed eyes.

She tells Rishabh to come and meet Arjun and asks them to hug each other.

Arjun looks at Rakhi and Rishabh with overwhelming feelings.

Rishabh thanks Arjun for saving his family on the plane.

While hugging Rishabh, Arjun feels nostalgic remembering past moments with him and Rishabh also feels the same way.

Just then Rishabh gets the call and goes to receive it.

Arjun asks Rakhi why she is not asking him why he is here.

However, Rakhi tells him that mothers only ask their children why he took so long in coming back and where was he.

As Arjun is about to confess being Karan, Preeta and Shrishti come in.

Arjun looks at Preeta as if he wants to hug her with happiness and cry in her arms at the same time.

However, Rishabh’s voice distracts them both and Preeta goes to meet Rishabh asking after him.

Arjun’s jealousy oozes out seeing Preeta and Rishabh together and before Rakhi can ask him more, Anjali’s call interrupts them.

Later, Anjali tells Arjun that she has found his chain lying on the floor and those people do not know about his truth yet.

© Copyright tellybest.com, 2022, 2023. All Rights Reserved. Unauthorized use and/or duplication of any material from tellybest.com without written permission is strictly prohibited.
Cached Saved on: Wednesday 25th of January 2023 10:39:49 AMCached Disp on: Sunday 5th of February 2023 03:39:21 AM