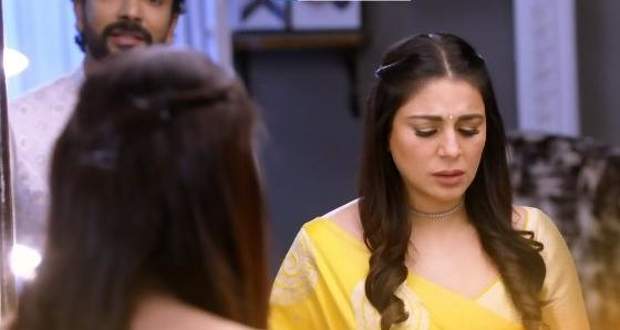 Today's Kundali Bhagya 16th June 2022 episode starts with Sameer rushing to inform the family but Shrishti stops him reminding him that not only Preeta but the baby's life is also at risk.

Shrishti says that they have to swap brides and form a plan hoping that it works.

Meanwhile, Prithvi covers Preeta's face so that he doesn't see her face.

At the same time, Shrishti and Sameer go downstairs while he again suggests that they should inform the family of the truth.

However, Shrishti refuses saying that Sherlyn's drama will alert Prithvi who can harm Preeta and the baby.

Further, Shrishti goes on the Mandap and intentionally throws the Pooja items into the fire to create huge smoke.

Afterward, Shrishti and Sameer take away Sherlyn from there while Rakhi notices them and goes after them.

Shrishti covers Sherlyn's mouth with a cloth and reveals the truth to Rakhi who slaps Sherlyn in anger.

Rakhi and Shrishti put the Pallu in a way that covers Sherlyn's whole face with the help of safety pins and they go towards the storage room.

Sameer puts a smoke bomb in the storage room and the priest opens the door while the family replaces Preeta with Sherlyn and goes away before the smoke goes away.

Downstairs, the rest of the family gets worried while Shrishti comes there with Preeta and lies that they went upstairs to avoid the smoke.

Rishabh looks at an emotionless Preeta sitting beside him and thinks that his vows for the marriage will be different as he is marrying Preeta out of respect and not love.

Both the marriages are completed after which the Luthra family gets Prithvi and Sherlyn arrested.

After five years, Preeta does the Pooja and further helps Rakhi in making Sheera.

Further, Preeta goes to Sameer's room and teases him for being too scared to wake up his wife as she removes the comforter from Shrishti's face and wakes her up.

Shrishti and Sameer start their banter while Preeta tells them to get ready and come downstairs.

Further, Preeta distributes the Prasad among the family members while Rakhi asks about Rishabh.