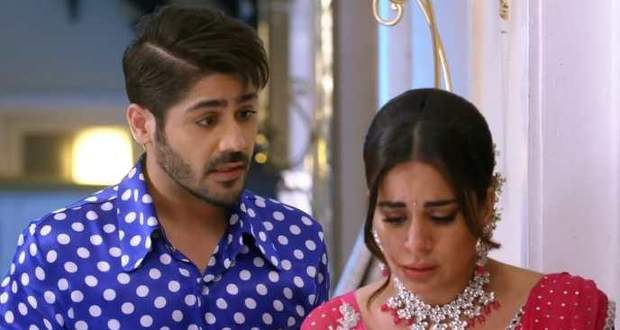 Afterwards, Karan teases Preeta for being fat however Preeta takes offence and ask him to prove his point.

Feeling cornered Karan uses the previous night's dancing with her as an alibi.

Coming into action Preeta puts Karan's arm around her waist to prove him wrong but later realises her mistake.

Both Karan and Preeta dance around each other with their eyes while Preeta fights being close to Karan.

Gazing into Karan's eyes Preeta tries to break free of his hold, however, Karan is in no mood to let Preeta go.

In the hall, seeing Prithvi smile Sherlyn assumes that Prithvi has come up with a plan to defeat Preeta in her own game however Prithvi’s nonchalance disappoints her.

Blaming Preeta for yesterday's debacle while showing concern for Mahesh, Prithvi announces the doctor’s instructions to keep everyone away from Mahesh, especially Rakhi.

On hearing Prithvi’s outrageous instruction, Preeta is angry and she goes after him to resolve the matter.

At the door, Preeta overhears Sherlyn and Prithvi planning to change Mahesh’s power of attorney and takes back Preeta’s power.

However, Prithvi mocks Sherlyn's plan while explaining the difficulty in getting hold of Papers from Preeta’s locker.

Later, she worries about disclosing this information to Prithvi and Sherlyn without actually telling him.

At the dining table, Preeta wonders about Prithvi and Sherlyn’s absence while Karan arrives asking for Girish.

After a while, Prithvi arrives and sits down while Preeta anxiously waits for Sherlyn before she gets a call.

Just after Sherlyn’s arrival, Preeta receives a call where she pretends to have some problem with her locker.

After a lengthy debate about the pros and cons of keeping papers at home, Preeta agrees to receive the papers but only through her lawyer.