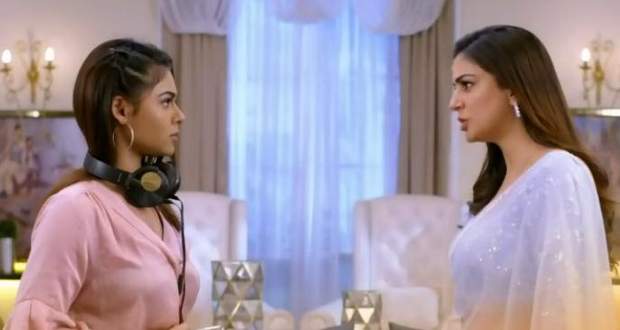 There is a letter and CD in the envelope that Sherlyn quickly plays.

Meanwhile, Preeta comes to Sherlyn's room to investigate the intruder and finds it empty.

She sees the broken window and sticky grease marks on the floor and immediately understand Sherlyn hiding something.

In the car, Natasha tells Karan to share his pain and anger with her and reminds him that after Preeta’s return he had stopped drinking.

Karan's anger rises with the repetition of Preeta's name and his speed increases and soon Karan crashes into a truck.

The truck driver observes Karan's drunken state and calls the police who take them to the Police station along with Natasha.

Meanwhile, Prithvi is watching the CD where he sees Rishabh in a jail.

Sherlyn gets scared while Prithvi reacts angrily at Sherlyn.

Prithvi tells Sherlyn to not think negatively while Sherlyn tells him that she is being practical.

Just then Sherlyn once again hears the voices in the video and goes to shut the door before listening further.

In this video, the inspector tells about Rishab getting executed after 7 days.

At the police station, reporters are leaving when they spot Karan and stop to find some sensational news.

Natasha defends Karan in front of the police telling them that she was the one who was driving.

After a while, Preeta reaches Prithvi’s door and tries to listen to the conversation but couldn't hear anything.

Meanwhile, Prithvi gets a ransom call from the strange man asking him to pay Rs 50 crores in 6 days or else they will kill Rishabh the next day.

Prithvi gets worried and tries to get the amount from the official accounts but failed.

Natasha requests the Driver to drop the case by pretending to be Karan’s fiance but greedy driver asks for her jwellery first.

Outside the police station, Karan questions Natasha for calling herself his wife and Natasha tells him that it helped them to get free.

Meanwhile, Prithvi is talking on the phone while Preeta tries to overhear him.

As Sherlyn goes to Prithvi, Preeta accidentally looks at the video on the laptop and gets shocked.