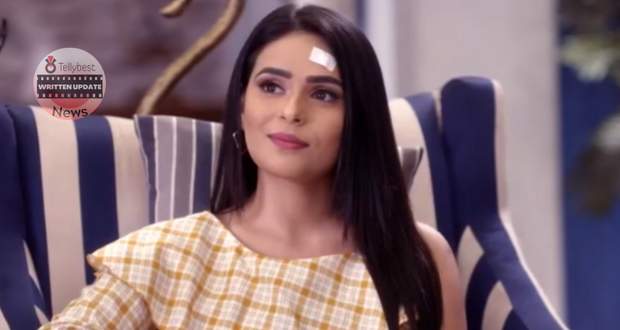 Today's Kundali Bhagya 16th November 2022 episode starts with Preeta showing her resentment at Arjun bailing out Anjali and asking Rishabh to take care of himself.

Preeta tells Rishabh that everyone loves him when Rishabh asks her if she loves him but he dismisses his question so that Preeta does not feel uncomfortable.

She later puts him to sleep asking him to take a rest.

Meanwhile, Arjun is pouring drink after drink remembering the times when Preeta and Rishabh asked him to stay away from Kavya and them.

Anjali comes and tries to stop him but he says that his love is always short for Preeta and she has loved Rishabh more than him.

Putting drunkard Arjun to bed, Anjali says that she will take revenge on Rishabh for targeting her and Arjun.

The next morning, sunrays disturb Rishabh's sleep which makes Preeta remember her moments with Karan and she starts smiling.

When Rishabh sees this, he asks if she was remembering Karan and says that he feels happy when he sees her happy.

Preeta gives Rishabh his medicines and asks if he feels hurt that she has not involved herself fully in the relationship but before she could complete Rishabh says that he is a helping hand that she will always find around.

On the other hand, Anjali asks for an increment as she is doing more than her job and he can drink as much as he can but once she leaves for London.

Arjun comes closer to Anjali and asks her again if she wants to go to London but Anjali changes her decision and blushes to see Arjun's closeness.

Just then, the topic of Preeta and Rishabh comes who are trying to snatch Arjun's daughter Kavya from him.

When Anjali asks him to calm down, he says he won't as this hatred gives him strength and he will put Rishabh behind the bars.

In the Luthra House, Rakhi scolds Rishabh for getting ready for office and when he says not to say it out loud as Preeta will scold him, everyone starts calling him a henpecked husband.

Preeta later calls Rishabh as she saw him leaving and scolds him for not listening to her.

Shristi sees Preeta scolding Rishabh for his health like a wife which Rishabh internally enjoys and Shristi teases her about it.

Shristi calls Preeta and Rishabh a perfect couple but Preeta calls her relationship with Rishabh a one-of-a-kind relationship where there is more respect and friendship.

When Shristi suggests that Preeta's life would have been totally different if Arjun was her partner, Preeta says no one should get a bad person like Arjun.

Meanwhile, Anjali and Snigda's grandmother are fighting over the absence of the workers which makes Dadi anxious and she asks Arjun to take her to the temple.

© Copyright tellybest.com, 2022, 2023. All Rights Reserved. Unauthorized use and/or duplication of any material from tellybest.com without written permission is strictly prohibited.
Cached Saved on: Monday 21st of November 2022 04:19:11 AMCached Disp on: Saturday 10th of December 2022 02:38:12 PM