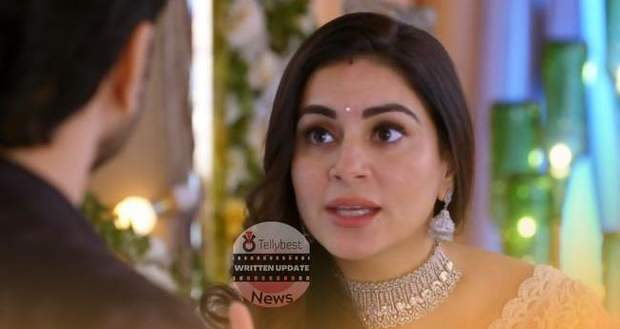 Today's Kundali Bhagya 17th August 2022 episode starts with Vishnu telling Raja to announce that Arjun tried to kill Rishabh then they will be divided and their work will be easy.

Raja approves of the suggestion and asks Vishnu to announce it on the mike.

Just then, Prithvi takes the mike from Vishnu and calls the Luthras to come and save Biji.

Meanwhile, Rishabh and Arjun leave the room after telling Kavya and Preeta to stay put.

Later, Preeta instructs Kavya to go inside and hide until she comes for her.

In the meantime, Prithvi begins the countdown and before he could finish five Arjun and Rishabh come in.

Prithvi gets angry and tells them to call everyone without showing any smartness.

However, Arjun uses the opportunity to distract Prithvi in talks and unarms the goons using a showpiece.

Afterwards, a fight begins between the Luthras and the goons while Sherlyn takes the bag and tries to run away.

In the meantime, Sameer points the gun at Prithvi, making everyone stop.

After a while, a police siren is heard and goons become curious about who has called the police.

As Preeta comes down, Shrishti tells Prithvi that she has called the police.

Prithvi sees the knife on the floor and picks it up through trickery and captures Preeta.

However, Arjun once again tricks Prithvi with talks and disarms him.

Seeing the police, Prithvi pushes Arjun and runs from there while the police run after the other goons.

After a while, Rakhi asks Preeta to do Rishabh and Arjun's dressing while Arjun refuses Preeta’s help and tells Rakhi that Anjali will take care of him.

Meanwhile, Prithvi and Sherlyn hide in the car seeing the police at the door.

Preeta takes Rishabh to the room to do the dressing and asks Kavya to come out and assures her that everything is all right.

Just then, Biji comes to Preeta asking for a medicine box for Arjun.

After a while, Rishabh smiles at Arjun for becoming a part of the family despite being weird.

However, Preeta tells him that it is this family that accepts strangers and makes them their own.

On the other hand, Anjali asks Arjun why did he refuse medical aid from Preeta and saved her despite saying that he has no feelings for her.

Arjun tells Anjali that he does not trust Preeta with his wounds as she might make it worse with her hatred for him.

© Copyright tellybest.com, 2020, 2021. All Rights Reserved. Unauthorized use and/or duplication of any material from tellybest.com without written permission is strictly prohibited.
Cached Saved on: Sunday 2nd of October 2022 06:24:21 PMCached Disp on: Thursday 6th of October 2022 05:17:19 PM