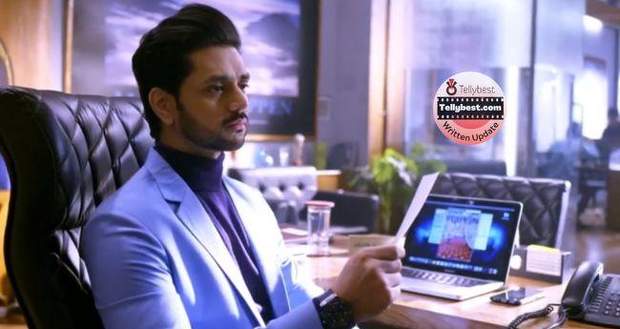 Today's Kundali Bhagya 17th January 2023 episode starts with Anjali telling Arjun that his chain is with her and this means that they do not know his truth.

However, Arjun tells her that Rakhi is behaving as if she knows about him.

Arjun tells her that he does not want to stay away from his family anymore while Anjali tells him to not get emotional and not to give any proof to the Luthra.

Just then, she spots someone at the door and tells Arjun that she will call him back.

Meanwhile, Anjali sees Prithivi walking freely in the house and wonders what he is doing there.

In the meantime, Arjun tells Rakhi that he feels precious when she calls her son.

Before Rakhi can tell Preeta about Arjun being Karan, Arjun interrupts her and thanks her for always being there for him and loving him and bends down to touch her feet.

Just then Preeta drags Rakhi away while Rishabh looks curiously at the exchange and asks Sameer if something has happened while he was away.

Elsewhere, Anjali asks Prithvi what is he doing here while Prithvi offers her a banana to eat and tells her that he is waiting for Arjun.

On being asked, Prithvi tells Anjali that he has a breaking news for them and tells her that he knows that Arjun is Karan.

Anjali is shocked to hear Prithvi and wonders how he found out about Arjun.

Meanwhile, Preeta tells Rakhi that they haven’t found any solid proof against Arjun whereas Rakhi tells her that Arjun has told her that he is Karan.

Preeta is shocked to hear that and runs to him complaining why has he not told her about him.

Preeta comes to Arjun calling him Karan which makes Arjun turn to her and look at her in anguish.

Preeta’s tears run down her face while Karan's eyes also grow teary as moments of the past run like a film in their minds.

They both cry at finding each other again and share the tears of misery that their lives have become.

As Arjun tries to touch Preeta, she stops him and shouts at him for not telling her about himself.

She tells him that she was living her life like a dead while he does not care to tell her the truth.

Arjun tries to justify himself but Preeta cuts him off and asks him what did he think that she was happy in her new life, and does not need him.

Did her tears, her cries, her anguish waves of misery never reached him?

She tells him that she was dying inside every second thinking about him while he did not think of telling her.

She breaks apart telling him that her life was no life but had died with him and only a mother was alive.

Thinking of Kavya, Preeta tells him that Kavya is his daughter but gets shocked to hear that Karan already knows.

She becomes hurt at Karan’s sorry and tells him that he is apologising for not being there despite knowing about Kavya.

Did he think all this was a joke, did he not once think about her or how she will be living without him?

Just then Rakhi and others also come there while Preeta asks her to scold him for keeping the truth from them.

Preeta tells Karan that she will never forgive him.

Just then Rakhi tells everyone that she was right all along as Arjun is Karan and is back with them.

Everyone begins to hug him one by one, Rishabh and Sameer also come down and hug Karan with immense happiness.

Karan apologises to Rishabh saying he is sorry that he ever doubted him.

Shrishti also tells that she has been saying for so long that Arjun is Karan but no one believed her and today it has come true.

Just then Arjun turns and asks Shrishti “who said he is Karan. I am not Karan but Arjun”.

Preeta Wakes Up From A Dream

Hearing that Preeta comes out of her reverie while Shrishti asks her where she has gone too.

Preeta asks Rakhi if Arjun has told her that he is Karan.

Meanwhile, Rakhi tells her that there is no need for him to say as he called her mother and that is all that is needed.

Preeta looks relieved saying that is what is puzzling her how could Arjun own to be Karan?

Seeing the disappointment on Rakhi’s face, Preeta tells her that they do not have any concrete proof yet.

Later, Shrishti asks Preeta what will she do if Arjun turns out to be Karan.

Preeta tells her that she does not know that but one thing is for sure she will not let him go unpunished for keeping the truth from them.

Preeta resolves to go to the depth of Arjun’s truth by any means.

© Copyright tellybest.com, 2022, 2023. All Rights Reserved. Unauthorized use and/or duplication of any material from tellybest.com without written permission is strictly prohibited.
Cached Saved on: Wednesday 25th of January 2023 10:43:53 AMCached Disp on: Wednesday 1st of February 2023 05:14:52 PM