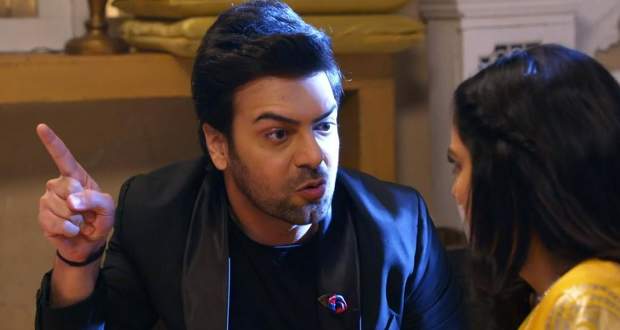 Today's Kundali Bhagya 17th June 2022 episode starts with Kavya arriving downstairs and asking Preeta and Rakhi to wait till she comes back.

Rakhi thinks of Kavya as the same as Karan.

On Kavya's insistance, Preeta calls Rishabh again and again while he keeps declining it.

As Rishabh picks up the call further on, Preeta scolds him as per Kavya's orders and asks him to bring chocolates when he comes back.

Rishabh informs Preeta that he is having an important meeting with Raja Rajshri as he has to be there for finalizing the deal to get his palace to build a luxury hotel.

Later on, Rishabh arrives at the palace to meet King Rajshri for the bidding at the auction.

To King, Rishabh offers 360 crores and mentions saving Raja's time as he has to arrive at his son's birthday party on time.

The King appreciates Rishabh's wit and business ethics and questions him if he knows more about his life.

Rishabh replies that he knows about his daughter and also mentions how he has changed the color of the palace from white to blue.

On the other hand, another competitor talks about losing the deal to Rishabh as he is the biggest hotelier.

Meanwhile, Arjun's manager informs him that he has lost the deal but Arjun threatens to offer a bid of 400 crores or he will be fired.

Arjun's manager offers his deal which shocks everyone but the King gives him another chance to Rishabh.

Rishabh offers 250 crores which creates a buzz and he mentions that he values the King's property more than making it a business and offers 25 percent of the partnership.

The King seems to be impressed by Rishabh's offer and accepts his deal.

Arjun tries to get all the details of Rishabh Luthra while Nidhi's sister suggests he focus on his engagement instead.

Arjun arrives at his engagement party where he meets his fiancee Nidhi who seems to be arrogant and threatens to cancel the engagement as Arjun is late.

Further, Arjun flirts with his fiance and tries to sweep her anger through his charm which works and he gets an apology.