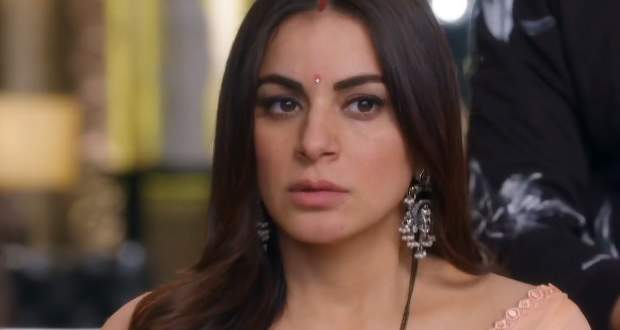 Today's Kundali Bhagya 17 Nov episode starts with Karan trying to prove that Preeta gets jealous. Preeta makes excuses and tries to cover up the situation.

Preeta falls down on the bed and Karan falls on her. Preeta wants him to get up while Karan asks her to apologize first.

They both fight and then sleep while Karan switches off the AC for Preeta. Preeta witnesses this and switches on the AC for Karan.

Srishti and Sameer talk on call and Sameer tell Srishti that everything is fine at Luthra house. Sameer asks Srishti to keep Karva Chauth.

Srishti makes fun of Sameer while Sameer gets scared of the idea of proposing Srishti because of Kareena’s threat.

Sameer is about to propose but Kareena comes there and interrupts their conversation. She asks Kareena to cancel all the meetings of Rishabh for the next day.

Preeta gets up to get ready and prays to Goddess Karva to keep Karan happy and give him long life. Karan wakes up and holds Preeta’s hand.

He promises not to fight with her on an auspicious day. Meanwhile, Rishabh switches off Sherlyn’s alarm while Sherlyn wakes up and asks why he didn’t wake her.

She accuses him of not treating her as his wife. Later, everyone gathers in the hall for Sargi while Preeta takes blessings from Dadi and Kareena.

Mahira also comes there and demands blessings. She wants Kareena to give her and Karan a blessing to be together.