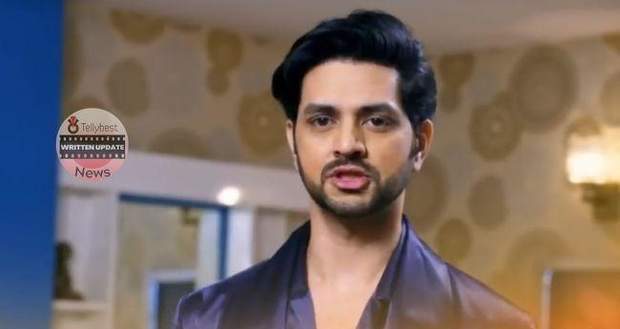 Today's Kundali Bhagya 17th November 2022 episode starts with Preeta asking Dadi for returning so soon while Dadi tells her that there is no one to take her.

Hearing sadness in Dadi's voice, Preeta offers to take her to the temple.

Meanwhile, Arjun arrives at the temple with Snigdha’s dadi while Preeta arrives with Dadi.

Later, Arjun collides with Preeta intentionally without realising it was her.

However, the touch reminds both Preeta and Arjun of their moment of togetherness.

Inside the temple, Arjun sees Preeta but his love gets overshadowed by Preeta issuing a restraining order.

Arjun walks out of the temple and analysis his feelings for Preeta who still hums for her.

In the meantime, Pandit Ji asks Preeta to go and offer Ganga Jal to Tulsi’s plant.

Meanwhile, Snigdha’s Dadi calls Arjun and asks him to come in and get her as she does not know the way out.

Arjun tells her to ask someone for the way and come out.

Just then Dadi who was listening to Snigdha’s dadi’s conversation takes the phone and scolds Arjun for giving his Dadi attitude and orders him to come at once to which Arjun agrees.

On the other hand, Rakhi is taking out clothes from the Almirah in preparation for the veneration that she has organised at home for Rishabh.

However, Mahesh asks Rakhi, about the connection between Veneration and clothes.

Meanwhile, Rakhi explains to Mahesh that she will be giving these clothes to Pandit Ji to donate in the temple to the newly married couples so they use the clothes and bless Preeta and Rishabh.

In the temple, Preeta and Arjun come face to face and freeze seeing each other near the holy tree.

Meanwhile, the wind blows upon them a holy Chunri over them as a sign of blessing.

They both come out of their trans and look sceptically at each other.

In the meantime, Shekhar is waiting for Rishabh and Arjun.

Just then Anjali arrives and informs Shekhar that Arjun will not be available due to a family emergency.

Meanwhile, Rishabh arrives with his team but refuses to start the meeting without Arjun and berates Arjun’s unprofessional behaviour where he can not bother to come for an important meeting whereas he was in hospital yesterday and is still present here.

Anjali comments on Rishabh feeling scared that he will not be able to win the business award for delaying the project.

However, Rishabh refutes Anjali sighting the professional ethics that has made him a successful businessman.

Anjali taunts Rishabh for being angry because of Preeta while Rishabh tells her to keep her family and wife away from his professional life.

Nevertheless, Anjali mocks him for being angry.

Elsewhere, the owner of the Holy chunri comes to collect it and tells them that it must have come to them to bless them as a couple.

Preeta becomes perplexed and accuses Arjun of following her while Arjun taunts her saying to call the police for this.

Preeta scolds Arjun for holding her Saari while it was only lodged in the bush which makes Preeta embarrassed.

Arjun and Preeta banter with each other when Snigdha’s dadi comes looking for Arjun.

Seeing Preeta, Dadi smiles at her and tells Arjun that she knows how much he likes her.

Later, Arjun cribs about someone’s poor parking when Preeta and Dadi come there.

Arjun berates Preeta for poor parking while Dadi in her innocence confesses to crashing his car.

© Copyright tellybest.com, 2022, 2023. All Rights Reserved. Unauthorized use and/or duplication of any material from tellybest.com without written permission is strictly prohibited.
Cached Saved on: Monday 21st of November 2022 03:33:08 AMCached Disp on: Sunday 4th of December 2022 11:09:34 PM