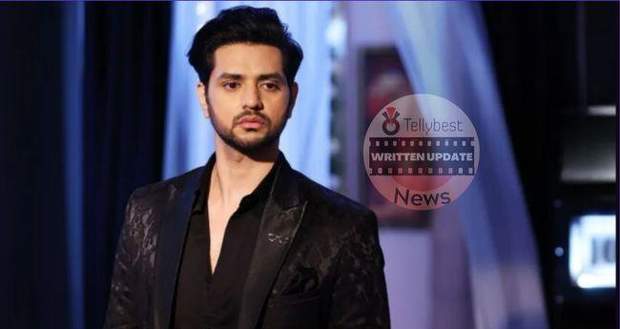 Arjun thanks Biji for coming with the medicine box else Anjali would have continued to irritate him.

Anjali tells Arjun she doesn’t know how to do a bandage.

Meanwhile, Rakhi finds Shrishti in the kitchen who is crying at the thought of losing Rishabh, Preeta and Sameer.

Sameer overhears Shrishti and Rakhi’s tearful conversation and comes to cheer her up.

On the other hand, Rishabh praises Preeta for doing the bandage and goes to get the medicine from the box.

Meanwhile, Rishabh thanks God for saving him and his family.

Just then, Preeta comes in and sees Anjali and Arjun fighting over a bandage and tells Arjun to sit and get the bandage done by her.

As Preeta applies the disinfectant, Arjun feels the burn while Preeta tells him that pain kills pain.

Arjun tells her ironically that she is the master of giving pain.

However, Preeta ignores his comment and tells him to be quiet.

Preeta’s nearness affects Arjun and he looks at her mesmerised remembering the old time.

As soon as she is done with the bandage, Kavya comes in.

Seeing Kavya dressed in cricketer garb, Arjun recalls his past moment when he decided to make his children wear cricket clothes.

All of Arjun’s memories are filled with his happy and romantic moments with Preeta.

Coming out of his reverie, Arjun calls Kavya inside while Preeta tells her to not disturb her.

However, Kavya tells Preeta to not speak while two adults are talking and take Arjun with her.

Preeta is astonished to see Kavya so frank with Arjun while Anjali thinks that Kavya understands that he is family.

In the meantime, Prithvi and Sherlyn are trapped in a car and argue with each other.

Meanwhile, Mahesh and Karishma ask the police to take a good look everywhere and not allow any criminals to go.

Inside the house, Arjun clears the space with the help of the family to play cricket with Kavya.

Kavya is having fun playing with Arjun when the police come in with Mahesh and Karishma.

The police tell them that the goons managed to escape but they will find them soon and goes to check the house one last time to find clues to the robbers.

Later, Rishabh takes Preeta aside to ask something while Arjun looks at them enviously.