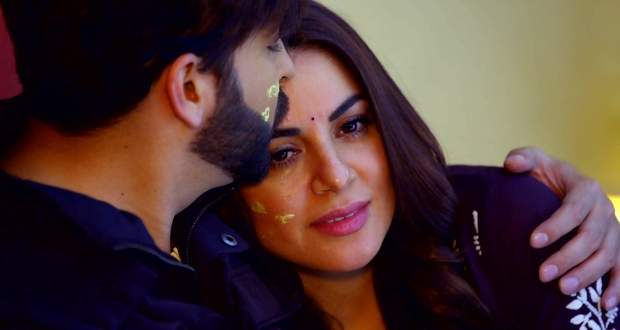 Preeta screams seeing a lizard on the wall while Sarla hears her screaming and enters her room in fear that there is a thief.

Preeta and Srishti are trying to cover him wherein Janki aunty sees Karan but pretends to be unaware of it.

Later, they feel that there is no thief in the house and go back to their respective rooms.

She even questions Karan’s decision to bring Preeta home even after Preeta’s actions affected Kritika’s wedding.

Karan replies that Preeta is his wife and he has promised Sarla to be with her in all the situations.

Later they both go to their room while Mahira gets tensed to witness the scene.

Mahira confronts Sherlyn and asks what she has to do now. Sherlyn responds to her that she is not interested in her sad story.

Sherlyn takes her revenge as Mahira did the same to her last night when she was sad.

Now Karan gets ready to go to the office. Girish tells Preeta that he is happy to see her back while in her absence Karan's smile had disappeared.

After Girish leaves Preeta asks Karan if he missed her.