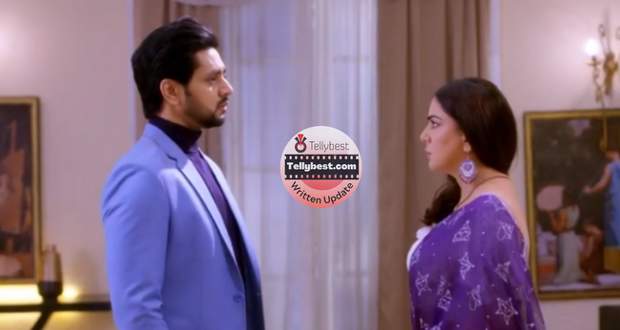 Today's Kundali Bhagya 18th January 2023 episode starts with Prithvi telling Anjali not to act as he can spot acting from anywhere just like Arjun is acting to be Karan's so that he can get hold of Luthra's property.

Prithvi tells her that he never imagined that anyone can be mean and conniving like him but Arjun is a step ahead of him and that is why he has come to check the competition.

Later, Sameer comes to Rishabh who asks him what is going on in the house and why is Arjun behaving weirdly.

Just then Mahesh comes to Rishabh and hugs him saying he has been waiting for so long.

Mahesh tells Rishabh that Rakhi is too emotionally stressed and is not listening to him and now he is his only hope.

On being asked, Mahesh tells Rishabh that Rakhi believes Arjun to be Karan.

Arjun looks at Preeta and recalls all the past memories with her and being emotionally vulnerable.

As he is about to leave, Rakhi asks him where is he going while Arjun tells her that he has to go as he got a call from the office and thanks her for caring for him at the hospital like a mother.

Just then Preeta stops him and asks him how much does he know about Karan while Arjun tells her that he knows only what he has read in papers and magazines.

Rakhi is shocked to hear Arjun’s answer while Preeta tells him that Arjun is definitely hiding something from him as he grew nervous when she asked him about Karan as if he wants to say something else but saying something completely different.

Later, Preeta and Shrishti show Rakhi pictures from Arjun’s house and tell her about their adventure.

However, Rishabh and Mahesh who just come there over hear them.

Later, Rakhi asks Rishabh if he felt like hugging his brother when he hugged Arjun.

Mahesh signals Rishabh to deny it while telling Rakhi that it is only her imagination and Arjun is not Karan.

Meanwhile, Arjun comes to his office, lost in his thoughts and do not pay attention to his manager who is telling him about taking over Luthra’s business as well as their shares.

He tells his manager to go ahead with the deal without really listening to it.

On the other hand, Rishabh comes to Preeta questioning her for risking her life going to Arjun’s house.

Preeta tells him that someone needed to find out the truth behind it.

However, Rishabh tells her that all he wants for her is to be safe. She can do whatever she thinks is best but not at the cost of her safety.

He also tells her that Rakhi is a mother who has become obsessed ever since Pandit ji told them about Karan being around them.

He also wants to believe it to be true but he saw Karan falling with his own eyes and she was there too.

Preeta tells her this is the reason why she wants to find out the truth about Arjun.

As once Rakhi sees the evidence she will be free of this obsession and they will also stop running after them thinking of him Karan.

Rishabh asks Preeta if she misses Karan and then tells her that Karan deserves to be missed but Karan would never do the things that Arjun has done.

He reminds her of Anjali who lives in that house and tells her what she has done to him and how dangerous she can be.

Hearing determination in Preeta's voice, Rishabh tells her to do as she likes and he will always be there to help her in any way he can.

Meanwhile, Shrishti is scrolling through the photos when she stops at one photo and runs to Preeta to show her.

Preeta recognises the pendant to be Karan and looks thoughtful.