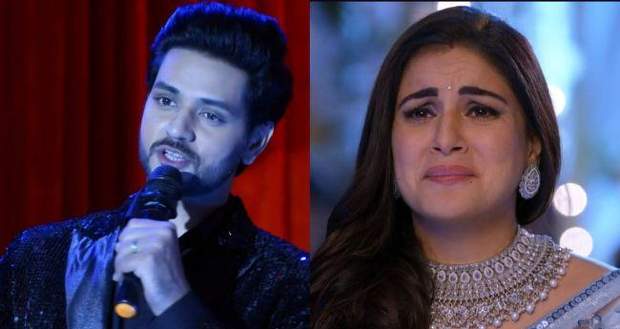 Today's Kundali Bhagya 18th July 2022 episode starts with Karan telling Anjali that he will not rest until he destroys her so that she understands what it feels like to be in pain and lose everything.

Meanwhile, Rishabh comes to Preeta’s room to apologize to Preeta for taking her forcibly to the party.

Just then kavya comes to them and brings a smile to them and asks Preeta to make her sleep as she is tired.

On the other hand, Arjun/Karan is indulging in alcohol and watching the video and wondering about Preeta who does not like to be touched by him for it reminds her of Karan. He plans to sleep well today as he has succeeded in spoiling Preeta’s sleep.

In the meantime, Rishabh is wondering about Preeta and Arjun when Sameer comes to him asking for Preeta.

Rishabh tells him to find out everything about Arjun and why did he buy Karan’s things at the auction.

After a while, Preeta is remembering Karan and tonight’s event and so is Arjun/Karan.

Later she decides to never think of Arjun while Arjun is feeling the pain of lost love and Preeta’s betrayal.

Elsewhere Rakhi is also remembering the events at the party and tells Mahesh that despite Arjun’s brashness and misbehaviour with Preeta she feels helpless to show anger to him and feels helpless.

Mahesh comforts her saying that she sees Karan in him and she has done nothing wrong.

Later, Preeta is standing when Arjun/Karan comes to her and assures her that he knows where Karan is and promises to take her to Karan.

As she gives her hand to Arjun/Karan and then he captures her in her arms and stabs her with a knife.

Preeta runs to the lounge after waking up from the dream with a shout.

Rishabh tries to stop her when all the members come to the drawing room.

Preeta tells them about her dream while everyone looks at her sympathetically.

Rishabh tells her that it was a dream and nobody can touch her let alone stab her.

Rishabh also tells Preeta that Karan lives in her heart and Arjun does not know where Karan is.