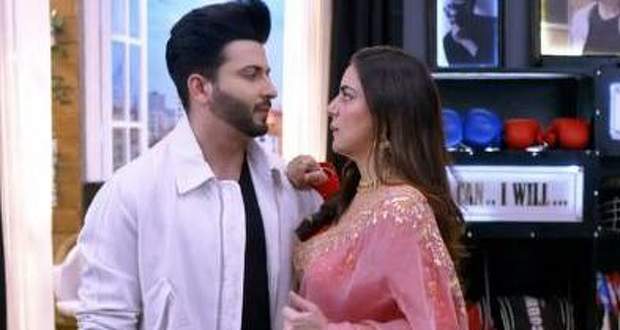 Preeta acts stunned and questions everyone about keeping tabs on her.

However, Dadi tells Preeta that she herself has told everyone while talking loudly on phone.

To move Preeta’s plan forward, Shrishti begins to argue with Kritika which turns into a fight.

Later, Preeta scolds everyone and orders Girish to get a headache medicine for her.

Meanwhile, Shrishti sees Preeta’s medicine and tells her that this particular medicine makes her sleep like a dead log.

Preeta pretends to get worried and asks Shrishti to spend the night with her.

Afterward, Shrishti receives a message and has to leave immediately.

In the car, Sameer and Shrishti share a cute moment where Shrishti plays a practical joke on Sameer.

After a while, Natasha is making a dance video for her blog while Sherlyn interrupts her.

Sherlyn tells Natasha that she should focus more on keeping her identity a secret as she is getting paid for it.

Angrily, Natasha takes a challenge upon herself for proving Sherlyn wrong by stealing property papers.

While taking medicines from Kareena, Dadi asks about Rakhi and later tells her to sit and talk.

Dadi suspects Kareena of hiding something and insists to know.

After hesitating for a while, Kareena tells her mother that she plans to steal property papers to get rid of Preeta's rule which Dadi highly approves.

Admiring Karan is in his room, Natasha thinks of ways to get close to Karan and turn him against Preeta.