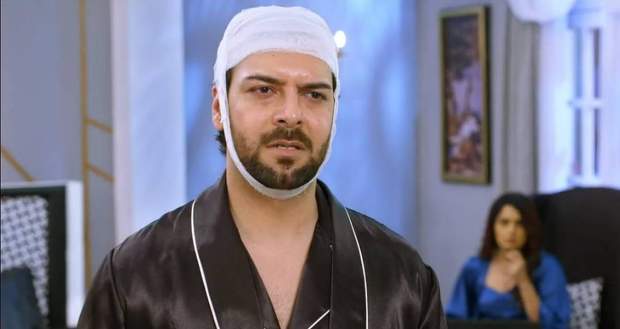 Today's Kundali Bhagya 18th May 2022 episode starts with Preeta telling Luthras that Prithvi, Sherlyn and Kritika are the ones putting the house on fire while they defend themselves.

Just then Karan comes in an intoxicated state and accuses Preeta of throwing everyone out of the house and gets angry while Preeta explains herself.

Just then Preeta get a call from Sameer telling them about finding the CD.

Preeta tells the Luthras that it is safe to go inside now.

Later, they watch the CD in Sameer’s room and call the number to find out more about Rishabh.

The person on the other side of the phone threatens Preeta and asks her to tell Prithvi that there is no point in playing games with him because it will cause him dearly and all his business in Dubai will also go from his hand.

He also reminded her that they are don of Dubai and have taken care of Rishabh's matter for so long and if the money is not paid on time then both Rishabh and Prithvi will face the consequences.

After the phone call, Shrishti gets angry at Prithvi for causing problems for Rishabh whereas Preeta is worried about the involvement of the Don.

Afterwards, Preeta decides to think about things overnight and come up with an idea to save Rishabh without risking his life.

Meanwhile, Karan gets a call from the reporter asking him about divorcing Preeta making Karan angry.

Preeta comes to her room to find Karan sleeping and feels disappointed at Karan drinking.

However, Karan wakes up and tells Preeta that he will leave her because he does not love her and because she has hurt him.

The next morning, Preeta comes to Sameer’s room where Shrishti is already waiting with a plan.

Preeta tells them that Sherlyn herself will become proof by confessing her crime.

Later, Preeta, Shrishti and Sameer plan their steps to blackmail Sherlyn into confession and after a while, Sameer goes to get the sim and gets up for Preeta.

At the breakfast table, Kareena, Dadi and Rakhi are discussing last night's fire.

Just then Rakhi sees the newspaper headline and angrily calls for Karan.

Everyone is surprised to hear Rakhi shout when Karan comes down.

Karan explains the situation to Rakhi but she is not convinced and asks Preeta about divorcing Karan.

Rakhi vents her anger on them while they all stand quietly.

© Copyright tellybest.com, 2020, 2021. All Rights Reserved. Unauthorized use and/or duplication of any material from tellybest.com without written permission is strictly prohibited.
Cached Saved on: Saturday 1st of October 2022 10:47:45 PM