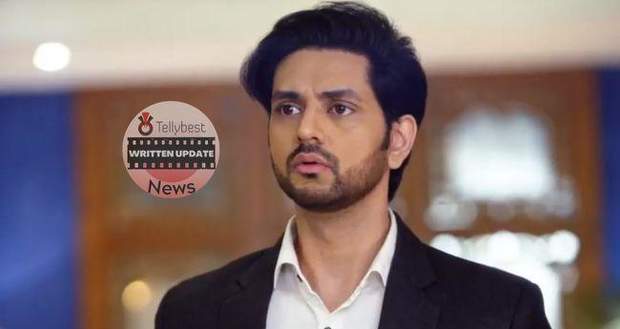 Hearing Arjun crib, Dadi and Preeta tell him to send the bill and drive away while once again nicking Arjun's car from the side.

Meanwhile, Rishabh rudely tells Anjali to not involve Preeta in their professional environment.

Anjali is not intimidated and shames Rishabh for treating Arjun so poorly despite what he has done for them.

Meanwhile, Shekhar tries to cool them off but Rishabh blames him as well for not clarifying that Arjun will not be taking the meeting.

Anjali tells him to talk to him directly and not behind professionalism.

After a while, Rishabh apologises to others for being personal in the office and walks away while Anjali stands alone looking frustrated.

In the meantime, Rakhi tells Shrishti to take the blessing of Pandit Ji when she opens the door.

However, it was Preeta and Dadi and they pulls Shrishti’s leg.

Rakhi tells Dadi that she has invited Panditji for tomorrow's veneration preparation while Dadi tells her that Preeta has crashed her car into Arjun’s car.

Rakhi becomes worried while Dadi continues to tell her that she has also told him to send the bill and not be cranky about his car.

Shrishti in her excitement compares Arjun’s behaviour with Karan which makes Rakhi sad.

After a while, Pandit Ji arrives and Rakhi asks him to perform the Joda Pujan (couple veneration) as well.

Elsewhere, Dadi and Arjun arrive home where the servant is waiting for them.

Arjun looks surprised to see him there while he explains to Arjun that Dadi has been scolding him for years but there is also love in her scolding.

Arjun accuses Dadi of taking advantage of him and tells her that he will not take her to the temple now.

Dadi also tempts him with meeting Preeta there but he denies having feelings for her.

However, Dadi tells him that he has eyes only for Preeta and advises him to throw away his engagement ring because he loves no other.

Meanwhile, Preeta is in the kitchen when the milk boils over making Preeta superstitious and she calls Rishabh.

Seeing Preeta call, Rishabh realises the time and braces himself to be scolded by her for being so late.

However, he laughs at Preeta’s superstition and tells her to not believe in all this.

Preeta gets offended and tells Rishabh to not make fun of her and Rakhi’s beliefs, and instructs her to come home.

Later, Rishabh encounters Anjali on the road with the broken car and gets down to help her.

Elsewhere, Shrishti is playing with Kavya when Preeta comes inside and tells Shrishti that she cannot handle to see her loose and takes Kavya’s side to prove that she is not wrong.

In the meantime, Rishabh tries to start Anjali’s car but couldn't find the problem.

Later he offers to drop Anjali off wherever she is going.

Anjali accepts the offer and tells Rishabh that her house is not very far from here.

After a while, the weather turns suddenly and fast winds begin to blow.

Preeta’s superstitious mind becomes worried as sudden weather change is a sign of unauspiciousness according to sayings.

© Copyright tellybest.com, 2022, 2023. All Rights Reserved. Unauthorized use and/or duplication of any material from tellybest.com without written permission is strictly prohibited.
Cached Saved on: Monday 21st of November 2022 12:43:57 AMCached Disp on: Thursday 1st of December 2022 02:32:55 AM