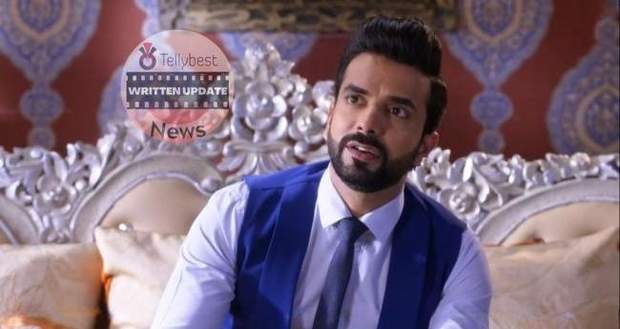 Today's Kundali Bhagya 18th October 2022 episode starts with Preeta entering the room thinking about the words of a woman who calls her Sada Suhagan while Rishabh comes to check up on her.

Rishabh assures Preeta that he understands how he must be feeling today as her memories must be torturing her.

He also tells her that she should remember Karan with pride and affection, not shame and pain and that she can share it with him if she likes.

Preeta fondly remembers her Karvachauth with Karan and how they were always fighting yet they loved each other.

Rishabh praises Preeta and Karan’s love for each other and he is very proud of them both.

Preeta emotionally thanks Rishabh for being so understanding.

Rishabh changes the topic and jokes about going to the meeting and then they will leave after the meeting.

Preeta looks surprised and tells Rishabh to not change his plans because of Arjun because she is not afraid of him.

Later, Arjun tries to make small talk with Rishabh but he asks him to cut it out.

Rishabh confronts Arjun about giving a contract to kill him.

However, Arjun defends himself by reminding him that he was the one who saved his life and that he is committing a grave mistake.

Just then Shekhar comes in and asks them to calm down and not to fight like brothers.

Rishabh refuses to accept Arjun as his brother while Arjun tells him that he once believed him to be a brother.

On the other hand, Shrishti and Sameer have a fight with each other as Shrishti feels too hungry and irritated.

However, Kareena comes to their room and scolds Shrishti for fighting with Sameer on this day when she will have to take blessings from him.

However, Sameer takes Shrishti’s side and asks Kareena not to scold Shrishti.

On the other hand, Shekhar’s wife Radhika announces the sighting of the moon and asks the husbands to join their wives.

Arjun wants to finish the presentation but Rishabh leaves the table saying Preeta is more important to him than any meeting.

Elsewhere, Shambhu comes to Prithvi’s house looking for him and slaps Sherlyn for calling the police.

Meanwhile, Kritika nostalgically complains to Kareena about Rakhi favouring Preeta and Shrishti more than her.

Shrishti looks lovingly at Sameer while he talks on the phone and hugs him from behind.

Sameer is surprisingly pleased and becomes romantic with her but Rakhi interrupts them while informing them about the moon.

Shrishti gets excited and rushes to the terrace to break her fast.

Meanwhile, Prithvi returns home to find Sherlyn sitting in a corner with blood seeping from her lips.

Sherlyn tells Prithvi that Arjun and Rishabh are behind her condition as their refusal to partner with him has brought Shambhu back into their life.

Sherlyn asks Prithvi to take revenge upon them and make them cry just as she is crying.

© Copyright tellybest.com, 2022, 2023. All Rights Reserved. Unauthorized use and/or duplication of any material from tellybest.com without written permission is strictly prohibited.
Cached Saved on: Monday 21st of November 2022 05:09:13 AMCached Disp on: Wednesday 7th of December 2022 04:16:21 PM