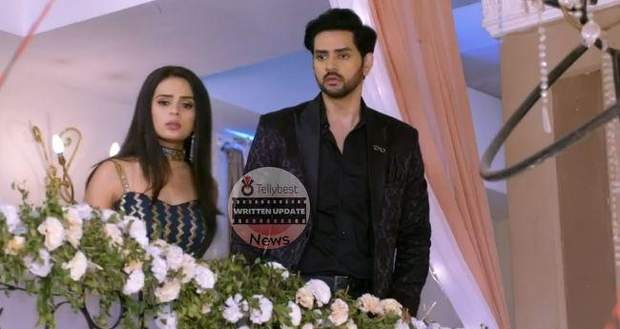 Today's Kundali Bhagya 19th August 2022 episode starts with Anjali asking Arjun that they should leave while Rakhi tells her to wait some more.

Just then Arjun realises that his phone has been exchanged with Rishabh’s phone.

After a while, Luthras praises Arjun for bonding with Kavya and asks him personal questions about his family which makes Arjun leave with an excuse.

Meanwhile, Shrishti and Sameer help the police in searching the house.

During the search, a constable finds a wallet and takes it into custody.

Just then, Mohan comes to Shrishti and Sameer and tells them that one of the goons looks familiar to him but he cannot remember who it was.

In the meantime, Rishabh brings Preeta to the room to apply the ointment to her wound.

Just then, Arjun arrives to change his phone with Rishabh.

Before he could leave, the police inspector comes to fetch Rishabh and he tells Arjun to dress Preeta’s wound.

Preeta feels hesitant and tells Arjun that it's just a minor scratch and she will dress it herself. However, Arjun threatens to make a fuss by telling her family who will get worried and take her to the hospital.

Preeta gets scared and agrees to get the treatment.

However, as Arjun applies the ointment after cleaning the blood, Preeta starts having weird feelings about Arjun and Karan’s memories bombard her.

In the meantime, Police inform Rishabh about the serial killer and asks him to file an FIR at the police station.

Rishabh goes to inform Preeta and finds Arjun has catered to Preeta’s wound and are arguing with each other.

Hearing about Rishabh leaving makes Preeta worried and she tells Rishabh to send Arjun in his place as Rakhi will get worried if he leaves the house now.

Rishabh like the idea and tells Arjun to file the report on his behalf.

Meanwhile, Rakhi is searching for Laddoos in the kitchen with Anjali and asks her about Arjun’s past.

Anjali distracts Rakhi and hurries to leave citing an excuse about an early meeting.

In the Parking, Prithvi asks Sherlyn to use the back door of Luthra's house to escape and update him about the situation from outside.

After a while, police starts to search the cars and Prithvi hides inside the dikki of one of the car.

On the other hand, Inspector tells Arjun about the serial killer which surprises him and Anjali.

© Copyright tellybest.com, 2020, 2021. All Rights Reserved. Unauthorized use and/or duplication of any material from tellybest.com without written permission is strictly prohibited.
Cached Saved on: Saturday 1st of October 2022 11:16:36 PMCached Disp on: Wednesday 5th of October 2022 04:42:48 PM