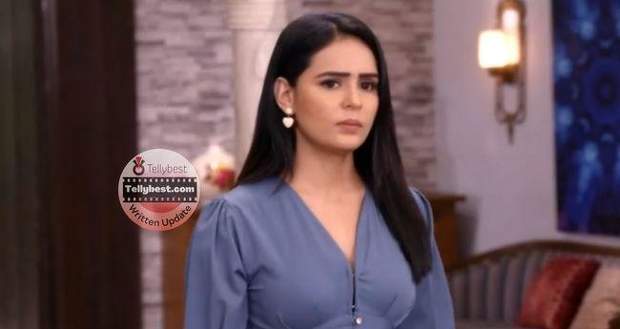 Today's Kundali Bhagya 19th December 2022 episode starts with the peon stopping Arjun from entering Kavya’s school with an ice cream vendor, however, Arjun convinces him to call Kavya outside instead.

Kavya gets happy upon seeing her Mr. Handsome (Arjun) who surprises her with ice cream as a token of apology.

Arjun agrees and sends Kavya inside the school and realizes that Kavya left her water bottle with him.

Meanwhile, Preeta is talking to Kavya’s teacher and notices Kavya behaving strangely as she sees her.

Kavya runs to the other side and locks herself inside the fuse room as she fears Preeta will take away her ice cream.

Preeta follows Kavya to the room while Arjun also comes inside the school to return Kavya’s water bottle.

Inside the fuse room, Kavya trips over some wires as Preeta asks her to open the door.

The short circuit happens and sparks flew into the room scaring Kavya.

At the same time, Arjun comes there and Preeta tells him about Kavya being inside the fuse room.

Arjun breaks open the door and goes inside the room to bring Kavya out safely.

The fire erupts in the room while Arjun reaches Kavya, making her wear his jacket.

Preeta hugs Kavya in her warm embrace as Arjun comes out after rescuing her.

Kavya asks Arjun to remain always by her side as he buys her ice cream and also saved her from the fire.

Preeta denies Kavya and takes her out to go home but Arjun snatches Kavya from her and says that he doesn’t want either Preeta or Rishabh anywhere near Kavya as they are not capable enough to take care of her.

Preeta wakes up screaming for Kavya as her nightmare ends, making the entire family come to check up on her in her room.

Rishabh and Shrishti console Preeta that Kavya is safe and sound with them and Arjun cannot do anything.

Further, in the morning, the police arrive at the Luthra mansion to ask the Luthra family to take back their restraining order against Arjun.

At the same time, Rishabh receives a call regarding his meeting which he denies going to at first but Preeta asks him to go.

On the other hand, Kavya secretly calls Arjun and tells her that she likes him more as he buys her ice cream while Preeta comes there and sees Kavya talking.

Rishabh also reaches the venue where Arjun provokes Rishabh that he is going to win this time as well.

As the auction starts, Rishabh puts the highest bid after Arjun and closes the deal. He calls Preeta and informs her about the victory while the latter is outside the meeting venue.

Preeta sees Arjun and goes to him to mock him for losing the deal whereas Arjun flirtingly tells her that he wants only her.

Rishabh angrily asks Arjun to behave while the former tells that the land Rishabh has bought is built over municipality water land whose half share is going to the state government which shocks Rishabh and Preeta.

Later, Anjali asks Arjun how come Rishabh missed such big information to which Arjun replies that he distracted Rishabh by sending the police in the morning and later provoked him due to which his focus shifted to making him lose instead of the deal.