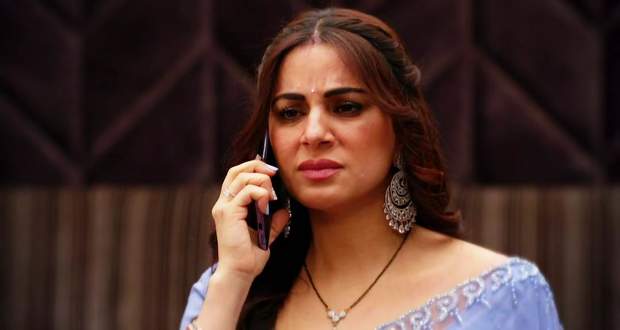 Today's Kundali Bhagya 19 February 2021 episode starts with Karan telling Preeta to profess her love over the call and leaves for office.

After he leaves, Preeta wears the saree gifted by Karan to her and she recalls the beautiful moments shared with Karan.

Preeta’s phone rings and without noticing the caller ID she receives the call.

Preeta thinks it is Karan and tells him not to interrupt in between. She further confesses her love for him.

Prithvi is on the other end of the call and he wishes her a happy valentine’s day. Preeta realizes that she professed her love to Prithvi mistaking him for Karan.

Meanwhile, Karan is trying to call Preeta to reveal his love but her call is busy.

On the other hand, Preeta is telling Prithvi that she professed her love to Karan but not him.

Meanwhile, Prithvi assumes Preeta is scared of her husband and tells her that they both shall reunite.

After that Prithvi cuts the call while Preeta gets tensed.

At the office, Sameer teases Karan for being upset about missing Preeta for just a few hours and they both decide to go home after the meeting.

Later, Karan signs a document without reading and rushes to see Preeta.

Prithvi calls Preeta again and threatens her to bring a marriage proposal in half an hour.

Preeta is worried while Srishti calls her. Preeta shares that Prithvi is threatening her.

Srishti tries to calm her but Preeta feels Prithvi’s threats will create trouble for her.

© Copyright tellybest.com, 2020, 2021. All Rights Reserved. Unauthorized use and/or duplication of any material from tellybest.com without written permission is strictly prohibited.
Cached Saved on: Wednesday 28th of July 2021 12:29:10 AMCached Disp on: Wednesday 4th of August 2021 06:34:22 AM