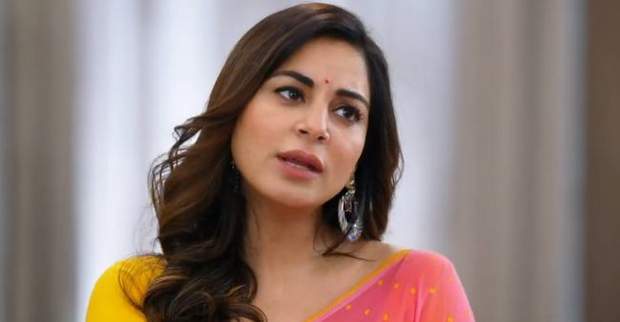 Preeta delivers a fabulous speech on the details of the project impressing the prominent investors present at the party.

Meanwhile, Karan admires Preeta from a distance for her presentation.

On the other hand, Sherlyn is worried about Prithvi as he has disappeared from the ongoing party.

Both Sherlyn and Natasha talk to Nagre about him supporting Preeta when he was Prithvi’s lawyer.

Nagre clarifies that he is not on Preeta’s side.

Also, Nagre informs Sherlyn that Preeta is very shrewd and cunning which has scared him as he has witnessed Shristi and Janki kidnapping Prithvi.

Nagre narrates the entire incident how Preeta has blackmailed him with the recording and also threatened him of being arrested in case of an attempt to murder.

Sherlyn confirms with Nagre if Prithvi is alright.

At the same time, Shrishti reminisces her last moment with Sameer.

Sameer attempts to talk to her but Shrishti dismisses him as she is still hurt by Sameer’s last words.

After Sameer leaves, Janki comes into the kitchen.

While Janki tries to make Shristi reconcile with Sameer, Rakhi welcomes Shrishti into the house.

Shristi wants to hug Rakhi but she has to keep up the act as asked by Preeta.