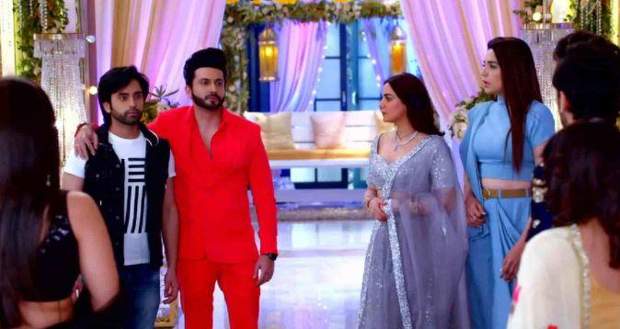 Today's Kundali Bhagya 19 March 2021 episode starts with Kareena waiting for Karan and Preeta to bring Shubham. She is adamant to prove the truth while Prithvi is scared that Shubham will tell the truth.

Ramona goes to Kritika’s room and taunts her while Rakhi gets upset with her. Ramona starts searching for Mahira while she is missing.

Sherlyn wishes to go out to search for Mahira and talk to Shubham as well. However, Kritika stops her as Srishti has told her to keep an eye on Sherlyn.

Ramona goes out to search for Mahira and threatens to bring the police. Meanwhile, Preeta, Karan, and Srishti reach Shubham’s house to enquire about Prithvi.

Shubham says he isn’t married and that Prithvi is a fraud. They bring Shubham to Luthra's house where they ask him to speak the truth.

However, Shubham gets a phone call and starts lying. He takes Prithvi’s side and says Prithvi helped him during his wedding.

Prithvi shows his innocence while Kritika is ready to perform engagement rituals with Prithvi. Karan goes inside in anger while Sherlyn confronts Srishti in the corner.

Sherlyn is mad at her for calling her Prithvi’s wife while they both get in an argument. The engagement ceremony takes place while Kritika is upset that Prithvi was hiding the truth and kept the picture.

Later, Prithvi and Sherlyn celebrate the happy moment while Mahira comes there and explains how she helped them.

She says she was locked in the cupboard but managed to escape and gave a letter to Shubham to lie about Prithvi’s wedding. She had also sent him some amount of money as a bribe.

© Copyright tellybest.com, 2020, 2021. All Rights Reserved. Unauthorized use and/or duplication of any material from tellybest.com without written permission is strictly prohibited.
Cached Saved on: Tuesday 18th of May 2021 03:37:37 PM