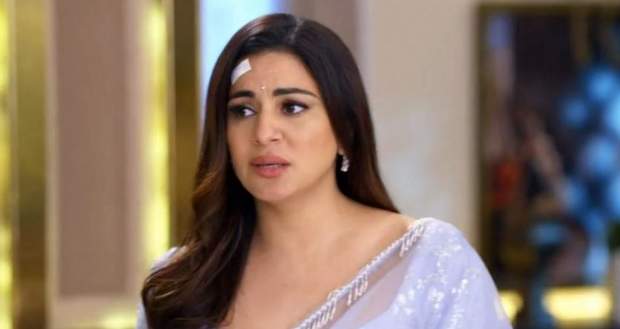 Today's Kundali Bhagya 19th May 2022 episode starts with Rakhi venting her anger on Karan, Preeta while Karan denies the allegations.

Rakhi is not convinced and blames Preeta and Sherlyn for not doing their duty and remembers Rishabh for always keeping everything intact.

Preeta angrily walks out of the room while Karan follows her and gets into a fight regarding the newspaper article.

Preeta tells Karan that his news affects her greatly as she is his wife and not a fling.

Karan sees Preeta’s pain and anger in her eyes and becomes speechless however, Preeta goes away in anger.

Later, Sherlyn brings Natasha to Prithvi and tells him everything while Preeta walks by.

Natasha tries to act innocent but Preeta sees through her acting and insults her.

Just then Sameer and Shrishti also come there asking about the debacle but Preeta tells them to ignore it and goes away.

However, Shrishti warns Natasha before leaving.

Sherlyn and Prithvi rebuke Natasha for her stupidity and advise her to apologise to Karan.

Natasha insults Prithvi and tells him that she has no interest in his advice as she knows how to handle Karan.

Later, Sherlyn also rebukes Prithvi and calls him a loser as all his plans fail one after another.

In Preeta’s room, Sameer and Shrishti express their concern for Preeta.

However, Preeta tells them that they will have to focus on Rishabh for now.

Meanwhile, Natasha plans a strategy to make Karan divorce Preeta and marry her out of his own will.

On the other hand, Karan is trying to find the reporter's number when Natasha comes in.

Natasha tells him that his mother is angry at her about the article and asks him to clear the misunderstanding in front of the media.

Karan assures her that after his practice tomorrow, he will call a press conference and clear the misunderstanding.

Natasha is happy to hear about the conference and plans to use it to her advantage.

After a while, Natasha is waiting for a cab and calls Karan hoping to get a lift when she feels she is being followed and tells Karan about it and later someone abducts her.