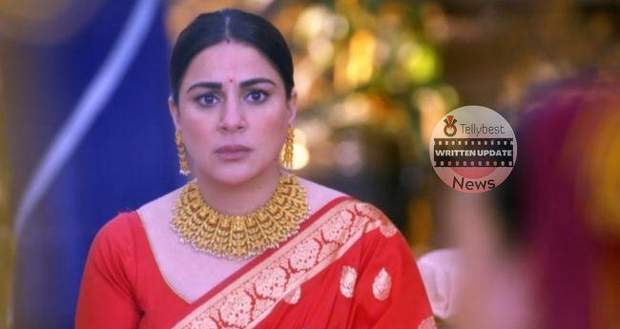 Today's Kundali Bhagya 19th October 2022 episode starts with Rani Sa telling everyone to do the pooja as the moon is visible now.

Arjun looks at Preeta from the above thinking that love and marriage and everything are fake since Preeta used to fast for him and now she's fasting for Rishabh.

At the same time, Preeta recalls her moments with Karan while she does the rituals and looks at the moon through the sieve.

Preeta starts losing consciousness as she turns to Rishabh and falls from the terrace.

Fortunately, Arjun is noticing everything and saves her while putting her down on the bench.

Further, Arjun makes Preeta drink water and helps her as the ladies start gossiping asking if he is Preeta's husband.

Meanwhile, at the Luthra house, Rakhi and Shrishti break their fast with Mahesh and Sameer.

Both are surprised to find that their husbands have fasted for them too.

At the same time, Kritika feels upset and tries to leave while Karina stops her and tries to encourage her saying that she doesn't need a man's love and should love herself.

However, Kritika says that she doesn't want to be there and leaves while Karina feels angry that Srishti and Preeta are happy while her daughter is upset.

Rakhi tries to call both Preeta and Rishabh but neither of them picks up her calls and she thinks of sending them a message so that they can call her later.

Arjun asks Preeta if she's okay but she pushes him away while Rishabh and others come there and help her.

The ladies take away Preeta while Rishabh turns to thank Arjun.

However, Arjun starts scolding Rishabh for not taking care of Preeta and says that he does not deserve to have her fast for him.

Rishabh says that he just wanted to thank him and goes to Preeta's room.

Preeta keeps saying that she doesn't need a doctor while Rishabh gets emotional and tells her that he needs her along with the Luthra family and Kavya.

He makes Preeta promise to not leave them and especially him while Preeta also gets emotional and tells him that she won't leave him.

On the other side of the building, Arjun tries to encourage himself to hate Preeta saying that she was planning to kill him while acting loving toward him.

He recalls the ladies wondering if he's Preeta's husband and tells himself that Preeta is keeping the fast for him whether she knows or not.

Just then, Anjali calls him, and Arjun rants to her about the event and tells her that he will be the one to ruin Rishabh and Preeta's life before disconnecting the call.

Afterward, Arjun gets in the waiter's dress-up with the intention to feed Preeta with his own hands.

© Copyright tellybest.com, 2022, 2023. All Rights Reserved. Unauthorized use and/or duplication of any material from tellybest.com without written permission is strictly prohibited.
Cached Saved on: Monday 21st of November 2022 03:23:31 AMCached Disp on: Sunday 4th of December 2022 11:42:01 PM