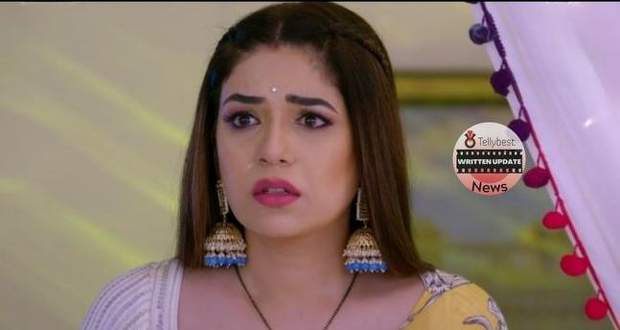 Today's Kundali Bhagya 19th September 2022 episode starts with Anjali telling Arjun about Rishabh coming to the office tomorrow and telling him to be on time.

The next morning, Rishabh is leaving for the office when Kavya comes running to him to say bye.

Just then Anjali calls Rishabh about coming to the office on time while Arjun hears, Kavya and Preeta’s voices in the background.

As Preeta and Kavya sit in the car Rishabh tells Arjun that he will reach the office in time.

Anjali leaves for the office early while Arjun contemplates his feelings when he sees Rishabh and Preeta close.

On his way, Arjun finds Kavya playing with the mirror while Preeta is busy reading something.

Later, Preeta asks Kavya to not disturb the outsider while Kavya tells her about seeing her friend.

In Arjun’s office, Anjali is clearing the files from the table when she finds Preeta’s pic in Arjun’s drawer and wonders if Arjun still feels something about Preeta.

Just then, Rishabh comes to the office and teases Anjali for hiding the picture of her boyfriend.

Anjali asks Rishabh to sit and tells him that Arjun must be on his way.

Meanwhile, Arjun is thinking about Kavya and disapproves of Rishabh not attending Kavya’s parent’s meeting.

On the way, Prithvi finds Arjun parked on the road and comes to meet him when Arjun moves on but Prithvi sees Preeta with Kavya and follows her car.

In the meantime, Anjali leaves the office on some errand while Rishabh looks around and sees Arjun’s photo in the half-opened drawer and assumes him to be Anjali’s love interest.

Seeing Rishabh near the drawer makes Anjali panic but Rishabh tells her not to worry and that he will keep her secret about Arjun.

Meanwhile, Arjun calls Prithvi to warn him off but hears Preeta’s voice in the background and runs to Kavya’s school thinking Preeta and Kavya are in danger.

At the same time, Kavya’s teacher tells Preeta to collect some books from the library.

Prithvi rushes to go to the library to wait for Preeta there.

Elsewhere, Shrishti calls Rishabh to inform him that she has fired the event managers for tomorrow's party and will take care of the event herself.

Rishabh feels staggered but tells Shrishti to do what she likes.

Meanwhile, Prithvi is feeling giddy at the thought of Preeta coming to the Library.

© Copyright tellybest.com, 2020, 2021. All Rights Reserved. Unauthorized use and/or duplication of any material from tellybest.com without written permission is strictly prohibited.
Cached Saved on: Saturday 1st of October 2022 01:50:37 AM