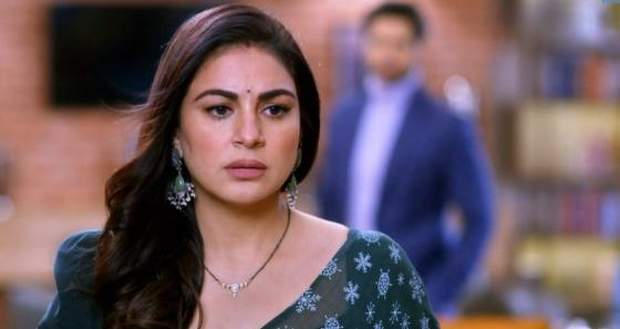 Arjun is thankful to Anjali and tells her that he couldn't have done anything without her.

Anjali coyly tells her that she would have always been there for Arjun.

Meanwhile, Rakhi presents Preeta with a new dress for her anniversary.

After a while, Rishabh finds Preeta in deep thought and asks her if she is alright.

Rishabh tells her that it has been five years since he has been looking after Karan’s Preeta and Karan’s Kavya.

Just then Kavya comes and tells them to sleep early as there is an anniversary party tomorrow.

Kavya, Preeta and Rishabh play and laugh with each other at Kavya’s jokes.

The next morning, Mahesh and Rakhi flirt with each other when Kareena comes to them and teases them for being romantic.

Meanwhile, Kavya wakes Preeta and wishes her a happy anniversary.

Just then Rishabh comes with a cup of tea and tells Preeta that Kavya has turned off all the alarms so that she can sleep.

Afterwards, Kavya asks Rishabh to wish Preeta a happy anniversary by kissing and hugging her but he says he is shy.

Rishabh tells Kavya that Rishabh is charming and handsome and girls use to frolic around him unlike him.

After a while, Preeta comes down and apologises to everyone for being late.

She is taking everyone’s blessing while Biji comes in and hugs Preeta.

In the meantime, Shrishti comes in saying that she is taking Biji to her room to talk with her while Preeta can look after the work as she hates doing household work.

Biji asks for Sameer while Shrishti becomes jealous and complains to her for caring more for him.

Shrishti asks Biji why men cheat on girls and what should she do if her husband cheats on her.

Sameer comes in with Dadi and butters Biji while Dadi scolds Sameer for cheating on Shrishti.

After a while, Shrishti comes down and oversees some of the work while praying for Preeta to come down fast so that she gets free of the work.

After a while, Rishabh comes down looking handsome and receives the wishes from everyone.