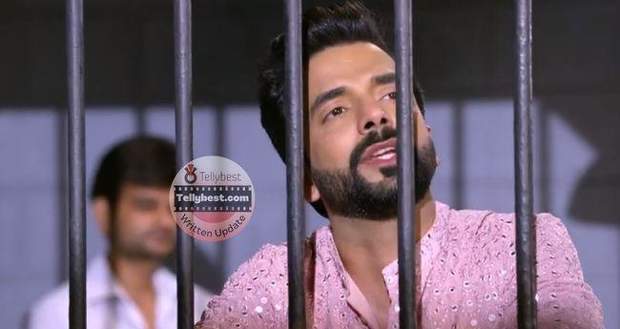 Today's Kundali Bhagya 1st December 2022 episode starts with Police telling Preeta that the time for the meeting is up.

Later, Rishabh tells his cellmate that it is his parent's blessing that he has gotten such a good wife.

He tells her that Preeta is written in his Kundali Bhagya and as long as Preeta and his parents are with him he can face any challenges in life.

Mahesh tells him that Malkani does not believe that Rishabh is innocent and refused to take the case.

In the meantime, Rakhi and Kareena also come to the police station to meet Rishabh where Rakhi tells Mahesh that she still wants to believe in Arjun who has assured her that he will talk to Anjali and take the case back.

Just then Preeta comes there and tells Rakhi that Arjun is lying and she should not believe him.

Shrishti tries to reason with Preeta and asks her to talk to Arjun for once.

However, Preeta tells her that it is of no use as he is lying.

Just then, Arjun comes there and Shrishti asks him to ask Anjali to take her complaint back.

Arjun recalls Anjali’s pain-filled comments and tells the Luthra that very soon the truth will come out soon and they will find out who is wrong and right.

Afterwards, Arjun asks the police to meet Rishabh while Preeta and Rakhi object to it.

However, the inspector rebukes Preeta and allows Arjun to go.

Arjun tells Shrishti that as a woman she should know that no girl will put such serious allegations upon herself without concrete reasons.

Later, Arjun asks Rishabh about marks on Anjali’s body while Rishabh explains to him all that has happened and she has marked herself.

However, Arjun calls Rishabh a liar and tells him that no girl will put allegations upon herself.

Rishabh feels disappointed and tells Arjun to go and prove his guilt in court as he has already formed an opinion about him.

He asks Arjun to see in his eyes and find out if he is lying or not.

Later, Anjali accuses Preeta of threatening her and holding her hand.

Preeta denies Anjali’s allegations but Anjali asks the police to get the CCTV footage to find the truth.

Arjun also comes there and looks astonished at Anjali’s complaint.

The inspector warns Preeta for the last time and tells the Luthras to go and meet Rishabh.

Outside the police station, Anjali tells Arjun that she likes him while Arjun gets a call from his lawyer and goes to talk to him.

Meanwhile, Preeta comes to Anjali to give her a last chance to take back the complaint else she will have to face the consequences of her lies.

Anjali is not intimidated and tells her to ask Rishabh to accept his sin and she will request the court to give him less punishment.

After a while, Priyanka comes to Anjali and tells her to go and accept to the police that she has been lying throughout.

© Copyright tellybest.com, 2022, 2023. All Rights Reserved. Unauthorized use and/or duplication of any material from tellybest.com without written permission is strictly prohibited.
Cached Saved on: Wednesday 25th of January 2023 09:01:45 PMCached Disp on: Wednesday 1st of February 2023 05:19:04 PM