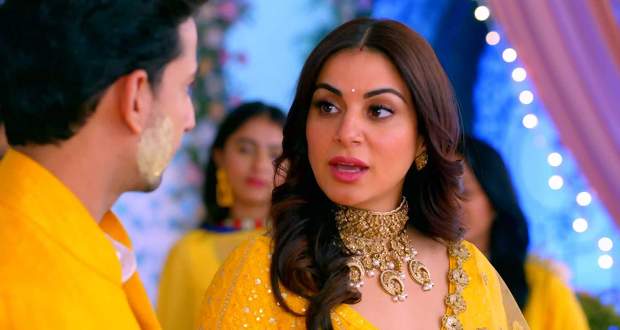 Today's Kundali Bhagya 1 February 2021 episode starts with Preeta wanting to expose Akshay in front of everyone.

Haldi ceremony is conducted and Karan applies Haldi on behalf of his father to Kritika and Akshay.

Preeta and Shrishti collect proof against Akshay while their vehicle gets hit by a truck.

Preeta handles herself well, collects Pen drive and phone that got fallen down.

Sarla is worried about Srishti that she is no more a child and she went away even without taking her consent.
Sarla calls Srishti and tells her that she has to reach home early as her grandmother is not well.
On the other hand, Shrishti tells Sameer that she is worried about her mother's reaction after reaching home.
Sameer, Srishti, and Preeta arrive at Haldi ceremony while Sameer's technician display pictures given by Preeta on the projector.
Preeta calls for everyone's attention trying to tell about Akshay's actual character.
But in contrast, it was the pictures of Akshay with his friends and Jago ceremony pictures of Akshay with Kritika and other family members.
Everyone becomes happy seeing this, the image of Akshay becomes more even better than before and Preeta's motive is completely failed.