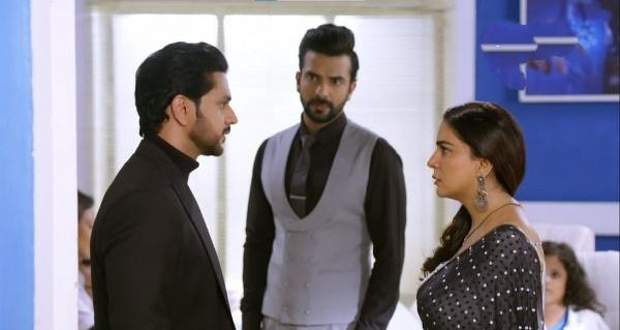 Today's Kundali Bhagya 1st July 2022 episode starts with Arjun watching Preeta’s pictures on a projector when Anjali comes in and guesses it to be Preeta.

On being asked, Karan tells Anjali that he does not love her anymore but hates her.

Anjali changes the subject and asks him about the timings of the auction.

Karan tells Anjali that in his list of enemies Prithvi and Sherlyn are included too.

Meanwhile, Sherlyn is working in the kitchen when Prithvi knocks on the door.

As he goes to drink water his stolen money falls on the floor. Sherlyn sees them and jumps on them while Prithvi tells her not to take a rupee from them.

Prithvi tells her that this money is to buy Karan’s bat, glove and ball from the auction so that he can burn them in front of Luthra and give pain to them through it.

Sherlyn berates him for that and asks him where he got the money from.

Prithvi tells her that it is his hard-earned money while Sherlyn tells him that he is not a hard worker and has definitely stolen the money.

Being irritated by Sherlyn’s nagging, Prithvi leaves the house.

As Prithvi is planning about burning Karan’s item, he sees the police coming with the man whose money Prithvi has stolen and calls Sherlyn to leave the house immediately.

On the other hand, Shrishti is suspecting Sameer of having an affair and tells the same to Rakhi and Mahesh.

Meanwhile, Dadi complains about Kavya’s naughtiness while Preeta comes with holy sweets and tells Rakhi that this is the Prasad for Karan’s veneration.

Later, Rishabh asks Preeta to go to the auction while Rakhi tells her that she is also coming to bid on Karan’s things.

However, Rishabh tells her that this is not right and that his fans will be disappointed if they couldn’t get his things.

Also, Karan’s things will be a source of inspiration for someone.

Elsewhere, Prithvi arrives at the five-star hotel and is asked about his ID and to stand aside.

Prithvi shows him the bundle of cash, seeing that, the guard goes to ask Sameer whether to allow him to come or not.

Later, the guard allows Prithvi to come after getting Sameer’s approval.

Prithvi is overjoyed at the thought of seeing Preeta and Rishabh after such a long time.

After a while, she tells Rishabh that Karan would have been very pleased to see his posters everywhere.

© Copyright tellybest.com, 2022, 2023. All Rights Reserved. Unauthorized use and/or duplication of any material from tellybest.com without written permission is strictly prohibited.
Cached Saved on: Wednesday 25th of January 2023 04:15:32 PMCached Disp on: Thursday 9th of February 2023 09:02:17 AM