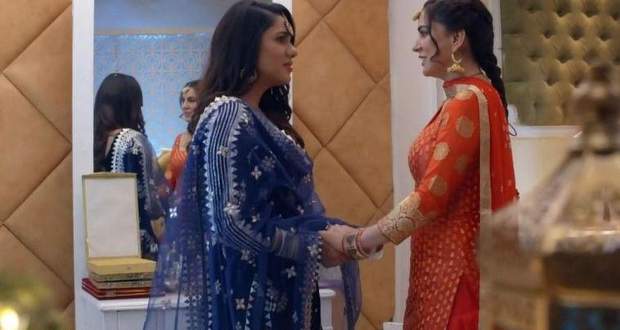 Today's Kundali Bhagya 1st March 2021 episode starts with Mahira pretending to be good in front of Karan but Karan ignores her and goes to his practice.

Kareena comes to Preeta’s room and reminds her about the marriage arrangements. She also warns her that arrangements should be to the standards of Luthra's house.

Prithvi meets Sherlyn in his car while Srishti sees Prithvi with a girl hugging each other.

But Srishti is not confirmed about the girl in his car so she calls Preeta to confirm if it's Kritika.

Later Srishti gets to know that Kritika is in Luthra’s house.

Further, Srishti follows Prithvi and sees Sherlyn getting out of the car.

After Sherlyn leaves, Prithvi’s mom gets into his car and they both leave.

On the other hand, Preeta comes to Kritika’s room and tries to warn her about Prithvi.

But Kritika misunderstands that Preeta is possessive about Prithvi and tells her not to have any bad feelings about Prithvi.

Meanwhile, one of the servants interrupts and informs that Prithvi and his mother have arrived.

After a while, everybody goes to have dinner while Srishti comes.