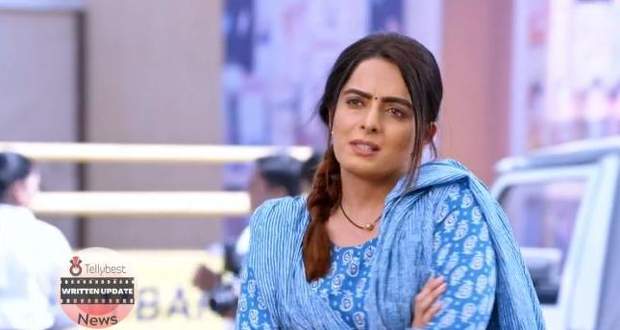 Today's Kundali Bhagya 1st November 2022 episode starts with Preeta begging the terrorist to send Kavya back home and asking him to keep her here instead.

The terrorist tells Preeta to go out where Kavya has gone.

Preeta argues with him to send all the children out while the terrorist asks her to leave with her daughter.

Meanwhile, the media is after the police for not taking action while the police tell them not to teach them how things are done.

The terrorist brings Preeta outside where Rishabh informs her that Kavya is still inside.

Preeta panics and wants to go inside again while Rishabh and Luthras take her aside to calm her down.

Sherlyn is disappointed in Prithvi for sending Preeta out instead of Arjun who is a bigger threat to him.

In the meantime, Arjun frees himself from the chair and cuts his ties using a broken glass.

As he is leaving, he sees Kavya’s birth certificate on the floor and is shocked to see the date which was five months after his death.

He further reads the document and becomes happy to read his name in the father’s column.

All the moments move like a reel in Arjun’s eyes and he resolves to save Kavya, deciding not even a scratch can harm her now.

Meanwhile, Kavya is quietly leaving the room when the terrorist finds her again.

Later, Preeta is crying thinking of Kavya while Rishabh promises her that he will get Kavya out.

In the meantime, Shabbir tells his mates to tell everyone that they are back on track.

Seeing Kavya with the terrorist, Arjun barges on him and hugs Kavya.

Arjun attack Shabbir when he touches Kavya while his mates surround him.

Meanwhile, all the parents hear everything on the speaker as the phone gets connected.

Raja hits Arjun’s head and takes Kavya with him.

Later, Rishabh, Preeta, and Shrishti once again enter the school and search for Kavya.

Meanwhile, Sherlyn calls Prithvi who takes time to pick up the call as they begin to banter with each other.

Prithvi tells her that nothing is going as planned because he planned to kidnap Kavya and extort money from Rishabh but all of a sudden these terrorists arrived to spoil his plan.

Prithvi also calls the terrorists stupid fools who are not letting him play boss.

Sherlyn gets annoyed and tells Prithvi that Rishabh, Preeta and Shrishti have gone inside the school.

Before she could add more, her phone's battery dies down.

Meanwhile, Rishabh comes to a terrorist gunpoint while Shrishti saves him with a file folder.

Later, they shove the terrorist in the corner while Rishabh searches for Preeta, becoming restless.