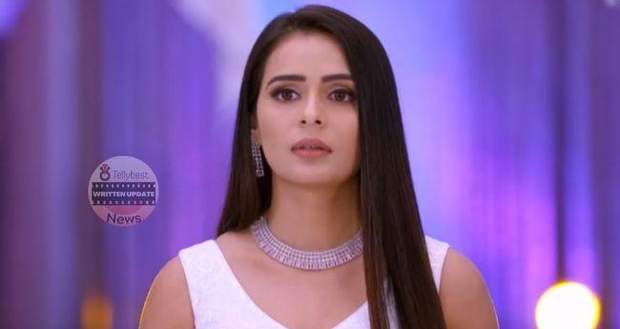 Afterwards, Sherlyn gives them instructions to change their get up and that she will be waiting with the car under this window and if they need her then she will be a call away.

Prithvi decides to give a fair warning and a chance to Arjun to rectify his mistake.

Meanwhile, Rishabh tells Arjun that Prithvi has escaped jail and that puts him in stress about the safety of his family.

Arjun also gets worried and tells Rishabh that Prithvi is an absolute Psycho and looks like a “Dadhi Wala Bakra”.

Rishabh becomes teary-eyed remembering Karan and tells Arjun that Karan lives inside him and is half part of him.

Arjun looks at Rishabh sarcastically while Rishabh continues on saying that his family love and accepts him a lot and if Arjun dares to hurt them then he will have to face his wrath.

After a while, Rishabh tells Prithvi that if Karan would have been here there then Prithvi wouldn't dare to come to their party.

In the meantime, Prithvi steals a phone from a guest and hides in Preeta’s room.

Realising it to be Preeta’s room, Prithvi feels giddy and hides behind a curtain hearing noise in the bathroom.

Just then Preeta come out of the bathroom and starts redoing her makeup.

Prithvi admires Preeta lovingly and tells her that he is here to check her out so she does not need a mirror.

Meanwhile, Prithvi calls Arjun and boasts about his escape from jail and tells him that he is in Preeta’s room.

Arjun gets angry and rushes to Preeta’s room and collides with Preeta coming from another side.

Arjun catches Preeta in his arms and forgets his surroundings while Anjali watches them together.

Later, Arjun tells Preeta to see where she is going as he will not always be there to save her.

Meanwhile, Anjali takes Arjun to a room and once again reminds him of his revenge and that he is falling in love with Preeta.

Arjun denies Anjali’s allegations and tells her that he is focused on his mission and shows her the Pendrive that will destroy Rishabh’s reputation in the business world and Preeta will not be unaffected by it.

Afterwards, Arjun comes to Preeta’s room to find Prithvi standing and looks at him with hatred.

Prithvi looks at him mockingly and tells him that he is here to give him a warning.

He also tells Arjun that he has crossed the limit when he accuses him of being a pervert and lecherous.

Prithvi also tells him that he loves Preeta.

Arjun becomes angry at Prithvi for calling Preeta the love of his life and punches him in the face.

© Copyright tellybest.com, 2022, 2023. All Rights Reserved. Unauthorized use and/or duplication of any material from tellybest.com without written permission is strictly prohibited.
Cached Saved on: Monday 21st of November 2022 01:11:13 AMCached Disp on: Saturday 10th of December 2022 01:20:16 PM