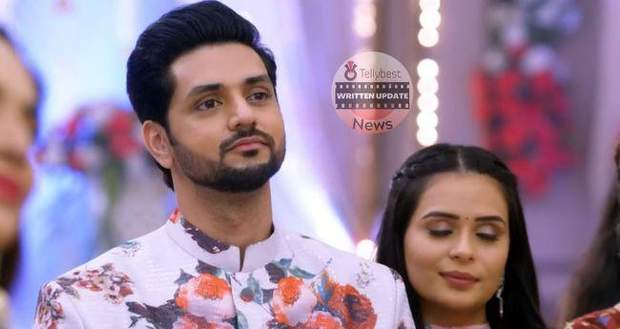 Today's Kundali Bhagya 1st September 2022 episode starts with Preeta asking Arjun to help her fix the curtain and climbs up a stool.

However, she gets disbalanced and falls in Arjun’s arms evoking various memories of the past.

Coming out of her reverie, Preeta scolds Arjun for catching her while he tells her that it is his manners and he would have caught any falling girl.

Preeta looks angry and tells him to go and catch them and leave her alone.

Arjun who has been holding Preeta for a long time gets angry and drops Preeta then and there.

Preeta lands on the floor with a thud while Arjun walks away from her telling Girish to help Preeta who can do nothing alone.

Shrishti who has been watching the whole scene recalls a similar scene with Karan and stands stunned.

After a while, Prithvi is cursing Sherlyn for creating a negative environment when he hears Rakhi’s voice talking to a Pandit.

Prithvi gets an idea and calls his friend with some instructions.

Just then, Kritika comes after Prithvi while he runs from there.

In the meantime, Shrishti helps Preeta get up while Preeta scolds her for laughing at her.

Preeta is venting her anger on Arjun and tells Anjali that Arjun thinks himself a hero but in reality, he is a villain.

Shrishti tries to cover up Preeta’s angry venting and tells Anjali that Preeta has only ever behaved this way with Karan.

She tells Anjali thoughtfully that Arjun also behaves with Preeta the same way as Karan use to behave.

Anjali is shocked to hear Shrishti’s apt analysis of Arjun.

Meanwhile, Prithvi has transformed himself into a Pandit and escapes Kritika’s suspicious eyes.

Later, Prithvi sees Sherlyn in Luthra's house and feels confident that Sherlyn will not recognise him.

However, Sherlyn is sure that she can identify Prithvi among millions of people.

Just then, seeing Arjun Prithvi is about to use chloroform on him when Rakhi interrupts him.

Rakhi is surprised to see another Pandit when she only invited one.

Later, Sherlyn takes Prithvi into a room and tells him to not pretend in front of her and calls him an overconfident fool who is prepping to fall.

Prithvi butters up Sherlyn to pacify her so that she helps him in getting money from Arjun.

© Copyright tellybest.com, 2020, 2021. All Rights Reserved. Unauthorized use and/or duplication of any material from tellybest.com without written permission is strictly prohibited.
Cached Saved on: Sunday 2nd of October 2022 11:12:50 AMCached Disp on: Wednesday 5th of October 2022 05:33:23 PM