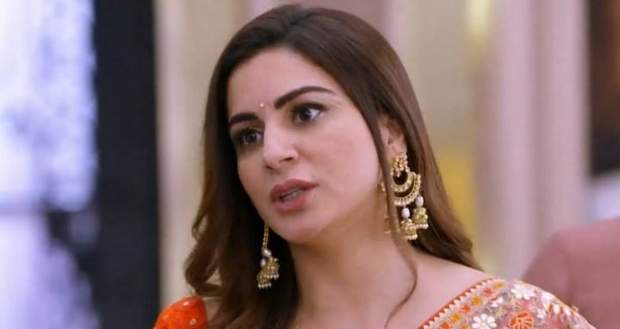 Just then, Prince finds a thread ball which Prithvi uses to get out of the room without being discovered.

Both Preeta and Karan are surprised to find the room empty.

Meanwhile, Prithvi is celebrating with a bottle of champagne when Sherlyn comes in to share his happiness.

Prithvi boasts to Sherlyn about his plan by telling her that soon the Luthra family will face the ultimate humiliation because of Karan.

After a while, Karan asks Preeta about showing so much attitude.

Preeta is angry with Karan for ignoring her earlier and fights with him telling him that everything in this house belongs to her including him.

Karan also tells Preeta that soon her days will change and he will become so important that she would need an appointment to meet him.

Preeta challenges Karan to play exceptionally well and he accepts.

Later, Prithvi and Sherlyn are enjoying being together while Prithvi talks of destroying Karan and Luthra's happiness.

The next morning, Sameer is waiting for Karan while everyone gathers in the drawing-room to bless Karan.

Meanwhile, the media is waiting at the gate for Karan’s interview.

Prithvi also waits in his car and calls a reporter with negative questions and plants a seed of doubt in his mind.

Prithvi also tells him that he can make his career by giving him the exclusive news.

Natasha stops Sherlyn on the way and expresses her sorrow for being a failure despite their extensive planning.

Sherlyn tells Natasha not to worry as Prithvi has concocted a solid plan that will destroy Preeta and Karan forever.

Meanwhile, Preeta is praying for strength and support for Karan.