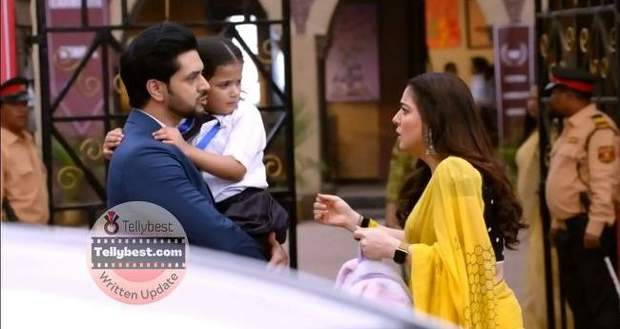 Rishabh tells Preeta that he has to borrow money from the market as he had bid the highest in the auction.

As Preeta shares her concern about Arjun planning to snatch Kavya from them, Rishabh assures her that it is Arjun’s trick only to scare them so that he can walk two steps ahead of them.

Preeta retorts that if Arjun wants to be 2 steps ahead, why they can’t be 4 steps ahead of him instead?

Hearing Preeta, Rishabh tells her that he has thought of sending Kavya and the entire family to New Zealand where his cousin resides.

He feels that once the family goes there, they will be safe and sound, away from Arjun & then he can fully concentrate on Arjun without worrying about losing his family.

The two discuss over this and Rishabh successfully convinces Preeta in going to New Zealand, telling Preeta that he will be brushing things in Arjun’s face the same way he did with them.

On the other hand, Arjun scolds his employee in the office for not giving the correct file while the latter informs him that his private investigator has come to meet him.

Angrily Arjun refuses to meet the investigator and the employee obliges by his command.

However, the investigator insists on meeting Arjun and runs inside the office when restrained.

Arjun gets angry upon seeing the investigator and security comes in to take him away.

The investigator shouts Kavya’s name which makes Arjun pay attention and ask the security to leave the man.

Arjun gets shocked as he comes to know that Kavya is being sent to New Zealand & her flight is scheduled for the evening.

On the other hand, the Luthra ladies reach the airport where Preeta collides with a man looking fishy, unaware that he is a terrorist.

The terrorist enters the airport while the news flashes on the television that the terrorist has been caught.

Meanwhile, Arjun drives to the airport while talking to Anjali to book him tickets to New Zealand.

Agreeing, Anjali ends the call while Arjun looks ahead and bumps his car into the other getting into an accident.

On the other hand, Rishabh tries to convince the investors to give him the loan however no one agrees which disappoints Rishabh a lot and he swears to pay back Arjun.

Elsewhere, people gather around Arjun who regains his consciousness to realize that he is going late.

Despite being stopped by the crowd, Arjun rushes for the airport while Preeta and others board the flight.

Meanwhile, Anjali goes back home when the manager tells her that Arjun has not collected the flight tickets and starts ranting to her dadi who asks her about the relationship between Arjun and Kavya.

Anjali remains at a loss for words whereas Arjun reaches the airport and runs inside followed by the security to stop him.