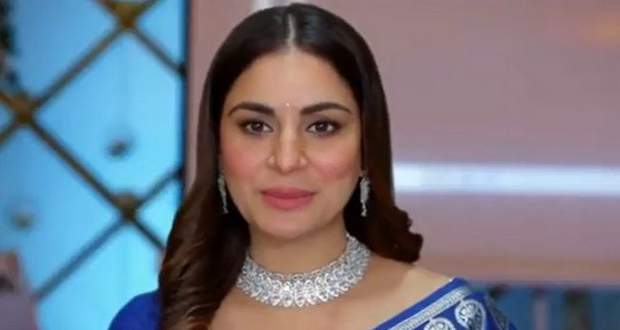 Today's Kundali Bhagya 20 Jan episode starts with Kareena seeing Janki sharing a hug with Rakhi as both women have reconciled.

Agitated, Kareena goes to her room where she complains to Bani Luthra about Preeta and her family manipulating Luthra's family members.

At the same time, Sameer comes into the room.

Sameer explains to Kareena how Preeta taking over the business is way better than Prithvi. He reminds her that Preeta just saved Luthra Company from going into Prithvi's hands.

Kareena doesn't like Sameer taking Preeta's side as she has always hated Preeta.

Kareena also tells Sameer that whenever Preeta returns to the Luthra house, she casts some sort of spell over him that he starts talking into Preeta's language.

Meanwhile, Mona informs Sherlyn that the snake charmer has arrived.

Confused, Natasha asks Sherlyn why they have called a snake charmer in the party.

Sherlyn narrates the entire plan to Natasha that Prithvi had formulated in order to prove in public that Mahesh Luthra has gone crazy.

Further on, Sherlyn and Natasha get into a heated argument when Natasha starts criticizing Prithvi and her.

During the argument, Natasha has almost revealed their truth if Sherlyn had not seen Janki eavesdropping on them.

On the other hand, Karan stops Preeta in the corridor when she was making her way back to the party.

Karan explains to Preeta how the police were suspecting him of being involved in her fake arrest.

Karan also tells her that the suspicion was shifted to Nagre later on, due to which the police had come to Luthra's house to talk to Nagre but they all get the surprise when they see Nagre praising Preeta and introducing her to the guests as the leading head of the project.

Preeta smartly turns the conversation to another subject as Karan repeatedly asks her to explain what had happened with her.

As Preeta keeps trying to excuse herself, Karan gets irritated and in a slip of tongue says he feels like a one-sided lover.

Preeta catches on to him.