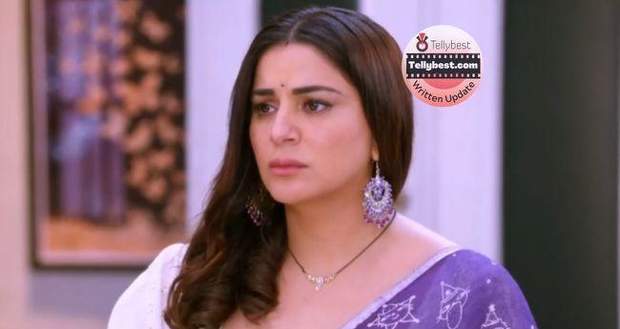 Today's Kundali Bhagya 20th January 2023 episode starts with Arjun watching Preeta making tea but looks elsewhere when Preeta looks at him reminding her of a similar moment in the past with Karan.

Preeta asks him if he will continue to watch her while she makes tea when he tells her that he is only trying to find out her secret of making good tea.

Later, Preeta turns to take the teapot and her eyes collide with Arjun’s and she gets lost in his eyes while Arjun tries to find himself in her eyes.

Shrishti who is peeking to check up on Preeta sees them lost and recalls a similar scene in the past when she had caught Preeta and Karan in the same state.

Later, Shrishti calls Preeta asking her to focus on Arjun’s fingerprints and not his eyes.

Arjun burns his hand while pouring tea and Preeta immediately puts his finger in the water while Arjun journeys back to the past being close to Preeta.

Later, Arjun and Preeta come out with a tea tray and serve tea.

Shrishti gets the extra cup from the kitchen knowing Preeta will forget something for sure.

Afterwards, she waits for Arjun to put his cup down so she exchanges it with the spare one.

Later, Preeta asks Arjun to sign a letter to the airlines as they will be leaving the luggage here and people from the airport authority will pick it up from there.

Seeing Arjun hesitate, Preeta tells him if he has some problem then they can take it with them.

However, Arjun signs it, as he does not see any problem with it.

Just then Arjun gets Anjali’s call and Shrishti carefully takes his cup from him.

Meanwhile, Anjali tells Arjun that Preeta and Shrishti were the income tax officers at his house and that they are after his truth.

Arjun is shocked and becomes suspicious of Preeta and Shrishti who are still at his house.

Later, Arjun hopes that they do not get anything from here that proves him, Karan.

After a while, Preeta calls Vishwas to ask about a handwriting expert and fingerprint expert.

Anjali becomes happy and calls Arjun to tell him.

Meanwhile, Arjun tells her that she was right about Preeta and Shrishti and wonders what will happen if they find out about him.

Anjali asks Arjun to meet him at the Luthra house.

Later, Anjali gives Arjun the choice to always be Arjun Suryavanshi or tell his truth to the Luthras and become Karan.

Arjun tells her that he does not know what he wants other than that her to stay in his life.

Anjali instigates Arjun to take over the Luthra house and that will keep his truth hidden from everyone.

In the meantime, Kareena comes to ask Mahesh if their house is mortgaged and becomes worried about the news.

Rishabh tells her that there is nothing to be ashamed of as this is a common practice in business and they still hold the majority of shares and nothing will happen to them.

Later, Arjun comes there and tells everyone that according to his challenge of seven days ago, he has taken over this house.

© Copyright tellybest.com, 2022, 2023. All Rights Reserved. Unauthorized use and/or duplication of any material from tellybest.com without written permission is strictly prohibited.
Cached Saved on: Wednesday 25th of January 2023 09:25:32 AMCached Disp on: Tuesday 31st of January 2023 07:01:26 PM