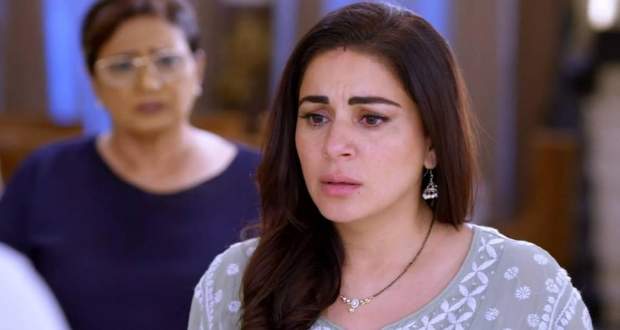 Today's Kundali Bhagya 20th July 2022 episode starts with Anjali asking Karan if he still loves Preeta while Karan refutes her saying he is worried because of his mom who was sad at the end of the party because of him.

Anjali tells him that once his revenge is quenched he will feel peace.

She also tells him that this is a rare opportunity given to him where he can take revenge on his killers.

On being instigated, Arjun promises Anjali that he will take his revenge.

Meanwhile, Rakhi prays to God for a miracle asking for Karan.

Just then Arjun arrives at the Luthra mansion and Rakhi sense his presence and walks toward the door.

Mahesh feels pity for Rakhi who is not ready to accept Karan’s death and goes to remind her of Karan’s death.

In the meantime, guards outside tell Karan that he is on the restricted list which angers Karan.

After a while, Karan arrives at Rishabh’s office and creates a scene when he is stopped from going inside.

Later, Anjali tells him that he should not have crossed the line and danced with Preeta the other night.

Unknowingly, Arjun hits Rishabh’s car in the parking while Rishabh tells him that he is not Karan Luthra who can barge into his home and office without permission.

Arjun apologises to Rishabh and offers a hand of friendship but Rishabh refuses him.

Later, at Karan’s misbehaviour, Rishabh loses his temper and warns him to stay away from his family else he will have to take action that Karan will regret.

Karan takes Preeta’s name which angers Rishabh even more and he tells him that if he ever takes her name again he will kill him.

Unperturbed, Karan taunts Rishabh for loving Preeta so much that he can kill for her.

Arjun tells Rishabh that he will regret misbehaving with him while Rishabh challenges him to come and get him if he is so brave.

Anjali drags Karan to the car while Rishabh repeats his warning to not come close to his family else there will be consequences.

Karan is driving rashly in the rain and drops Anjali on the way when she constantly annoys him.

Anjali follows Karan’s car while Karan thinks angrily of Rishabh and tells him that he has only a few hours to live with his beloved family.

© Copyright tellybest.com, 2022, 2023. All Rights Reserved. Unauthorized use and/or duplication of any material from tellybest.com without written permission is strictly prohibited.
Cached Saved on: Thursday 26th of January 2023 05:56:55 AMCached Disp on: Thursday 9th of February 2023 08:41:32 AM