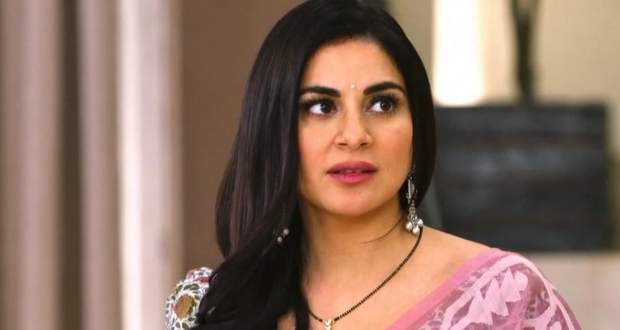 Later, Rishabh explains to his competitor what made his offer attractive to Raja Sahab.

Meanwhile, Arjun gets engaged to Nidhi.

While they were dancing Arjun gets a call from his employee telling him about losing the deal. Arjun gets angry and fires him on the spot and tells him that he is coming to India to win back this deal.

Arjun books an immediate flight to India which angers his Nidhi.

Arjun explains to Nidhi that he has been challenged by his ex-CEO that he wouldn't be able to crack this deal because Rishabh Luthra is a better businessman than him.

Nidhi gets convinced by him and allows him to go.

Arjun lands in India and gets a call from Nidhi.

Rishabh arrives at the airport too but Arjun couldn’t spot him.

As Arjun is crossing the lane he gets hit by a bus that flies in the sky and hit his head hard.

Just then Preeta has a bad premonition and goes to check on Kavya thinking something has happened to her.

The hotel employee takes Arjun to the hospital and informs Arjun's CEO about Arjun’s accident.

Arjun’s CEO informs Anjali who has landed in India.

Anjali tries to reach Nidhi but her phone is switched off.

Meanwhile, Doctors are operating on Arjun and calling senior doctors due to complications of the case.

At the Luthra house, Sameer arrives home at the time of Veneration and gets into a fight with Shrishti.

Later, Rakhi assures Kareena and Dadi that she has organised a veneration to bring peace to their life.

After a while, Rakhi gets a message about a great pandit coming for veneration and gets worried.

Rakhi tells Preeta and others that he is a very knowledgeable person and whatever he says becomes true.

Both Dadi and Kareena also remember his old predictions which have proven true.

On being asked, Rakhi tells Preeta that Pandit Vashisht is very strict and that is what is making her worried.

© Copyright tellybest.com, 2022, 2023. All Rights Reserved. Unauthorized use and/or duplication of any material from tellybest.com without written permission is strictly prohibited.
Cached Saved on: Monday 21st of November 2022 06:30:48 PMCached Disp on: Monday 5th of December 2022 01:47:53 PM